It amazes me that in this day and age people still have an absolute belligerent disregard for the environment. The old excuse, “ we didn’t know,” no longer serves as justification (not that it ever should have). I have written about Bimini before and its history as a big game fishing Mecca. Sadly, what we consider a monster fish has shriveled over the generations, as humans have devastated the oceans. The black and white photos that were seen on the wall of The Complete Angler (Ernest Hemingway’s old haunt for drinking and thinking) and now on the walls of The Bimini Big Game Club, are a thing of the past. Tuna longer than the average man and gorgeous marlin, larger than most sharks are not something our grandchildren will see or know. As pictures fade, so do the memory of what the ocean was.

After our week on the dolphin boat we stayed on the island for a few extra days and decided to rent a boat to do some exploring. Our friends Dony and Michelle joined us as we set off early in the morning, with a day on the water ahead of us. As we cleared the channel and headed south Dony spotted a large black trash bag on the surface. He suggested we grab it because it might be a million dollars from a drug drop. “ That’s how they do it,” he insisted. 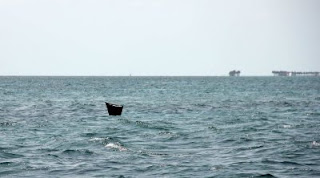 Money or not we motored over to pick up the trash that someone felt the need to dump in the ocean. We pulled up and he wrestled with the bag. There was a piece of fishing line attached and we assumed it was stuck on the bottom. Typical boaters trash; bait scraps and used bits of fishing line. Dony struggled a bit and Duncan took a turn on trash removal duty. He quickly realized that the tugging was not from being hooked, but from a shark that was hooked on the end of the line. Throwing the boat into neutral we went into shark tagging mode.

I grabbed gloves and pulled the massive 9ft nurse shark to the surface. Dony and Michelle were in awe and quickly grabbed the cameras. I held the shark steady while Duncan looked for a tool to remove the hook. All we had on board was a small Leatherman, but we knew we had to get the shark off the line. I grabbed the dorsal fin in an attempt to secure the animal next to the boat and then put it in tonic. This healthy male nurse was still in good condition and put up quite a fight, wanting nothing to do with our effort to help him. I switched places with Duncan in order to get a tail rope on the animal and secure it next to the boat. There was no way I could safely hold him for Duncan to remove the hook, without having him secured at both ends. Duncan pulled him to the surface and with one strong roll the hook was free and he was gone. I admit we were pretty happy that we didn’t have to put the animal through anything else in order to free him. Nurse sharks are incredibly strong and without the proper equipment the task was set to be quite a challenge.

We inspected the bag and realized that this was not trash that accidentally attracted a shark, but a make shift shark fishing rig. The heavy-duty trash bag was tied in a knot and the high test fishing line was wrapped around and attached with a fishing knot. The line ran to a weight followed by another length of line and a J hook with a scrap of bait still on it. The equipment was good quality and looked to be brand new. We have encountered block rigs before on a site that is used for shark diving and research. The culprits had used car batteries and cinder blocks tied to wire leaders and large rusted J hooks. This was a different technique, but with the same goal of catching sharks. The sick part is that the “fishermen” might not even come looking for the bags. This leaves trash and an injured or dying animal drifting in the sea until it hooks onto a rock or washes onto shore. We looked around to see if any boats were nearby or watching us, but it was a busy weekend and there were boats everywhere. 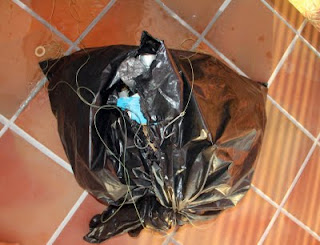 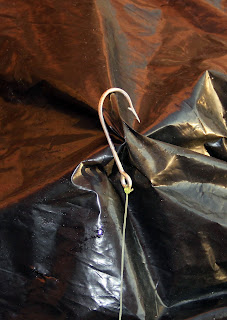 We motored along heading towards our dive site and spotted another black bag floating at the surface. Duncan and I told our friends to be prepared because we might find something on the other end that wasn’t as happy of an ending as the last encounter. The bag was near a site that is frequented by Caribbean reef sharks and on a line these sharks stress very easily. Dony grabbed the bag as we brought the boat alongside it. Happily there was nothing but a half eaten piece of bait on the other end. We were all on a natural high from having saved a nurse shark and preventing another shark or large fish from meeting its demise. We also hauled 2 massive bags of trash out of the water. I have to admit it really was a rush to defeat some idiot’s sick mode of weekend entertainment, most likely fueled by alcohol and an audience of idiots, and see an animal return safely to the ocean.

We examined the trash contents and found items that cannot be purchased on the islands. Bimini is small and it is easy to know what you can and cannot get there. This trash was brought over on a boat and that meant the culprits were most likely weekend warriors from Florida. It is one thing to use a rod and reel to catch a large fish, but to damage the environment so recklessly, enrages me. Who knows if they ever intended on finding the bags or if this was just an attempt to rid the oceans of some sharks for fun? It is easy to see that their target species were sharks because of the equipment used. Our excitement turned to anger and frustration. What is wrong with people? Is normal fishing not exciting enough? I am not here to oppose fishing, but I will speak against the devastating method of capture that we pulled from the sea. Again, are we still so ignorant, despite the amount of information we have access to?

We did not see any other bags that day, but we all wondered how many were out there and how many animals were caught and tangled at the moment. We asked around another bag had been spotted, but people assumed it was trash. The Bahamas survive on fishing as part of the economy, but they do not need people coming in and destroying everything they see. Out of season fish, undersized fish and conch and this ridiculous fishing technique. This was just on one busy weekend on one island. In my experience most real fisherman are big conservationists. They want to see the ocean thrive, so that they can share it with their children and grandchildren. They respect the rules, the take and size limits and are often big proponents for catch and release. I am not chastising fishing or fishermen, but I am speaking to the heartless idiots that felt the garbage technique was an acceptable activity. I hope that someone how this gets back to them or someone on the boat. What you did was wrong! Please respect the ocean. Consider your actions and think about what your children would think. Is it really worth it?
Posted by Shark-Girl at 11:27 AM