Shark Products: Beware and Be Warned


There is a disproportionate percentage of the population that seems unaware of the shark killing, consumption and demand lurking in their own backyard. Yes, the demand for shark fin soup is pushing many species to the edge, but this is not the only issue and it is not something happening only in Asian countries. Rainforest destruction, coral reefs dying, global warming and pollution; it can all seem overwhelming and the easy stance is, “ well it’s not happening where I live, so what can I even do.” When it comes to shark conservation I guarantee there is a lot you can do and yes, it is happening where you live!

You do not need to be an expert, scientist of even a diver to make a difference; we can all do something. You might be sitting in Colorado right now thinking, no way, there is nothing happening in my backyard that is impacting our oceans. Wrong! Have you checked out any natural or Asian grocery stores? Been to Target or a local fish market? Many different marine animals are used in ancient medicine including ground up shark cartilage, but you can also find it in pill form at modern stores like GNC and Target. See where I am going? This isn’t just happening in a far away land, it is happening everywhere. 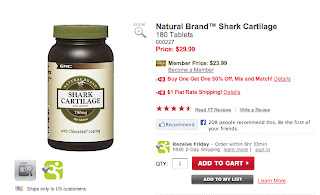 I wrote a blog a few years ago about tourist shops in South Florida and their propensity for selling shark jaws and sharks in jars. Yep, apparently nothing says, “I went to the Sunshine State,” like a shark fetus in a jar. Duncan and I walked into at least five stores in South Beach and each one was the same, hawking the same dried animal parts. Lemon shark jaws put me over the edge because the state of Florida had recently established a law protecting them. I asked a clerk if he knew where they purchased animals parts from and he got the manager. I was told a company called Holiday Souvenirs was the distributor for not only this store, but also most of the shops along the beach. 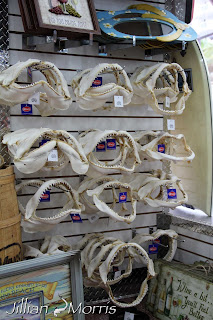 When we got home I did some research and contacted the Fort Lauderdale based company. It took a few attempts to get connected to a person that was willing to answer my questions and actually “knew” the answers. The conversation started out polite and I expressed my consumer concerns about the sale of lemon shark jaws. I asked the woman on the other end if she was aware these sharks had recently gained protection in Florida waters. She assured me they came from “overseas” making everything okay! Ha! I pushed further asking where overseas? Overseas was her answer, which clearly she felt should satiate my inquiry. I asked how they were acquired? Apparently, wait for it, poor fishermen catch sharks to feed their families and the jaws are just a byproduct they sell to make a little extra money. Wow, a lot of poor fishermen “overseas,” are trying to feed their families and this company is being very civic by purchasing those jaws. I continued to push. “ So thousands of shark jaws are only collected as a byproduct from poor fisherman? “

“What about the shark fetuses?”

“ Sometimes the sharks they catch to feed their families are pregnant and they collect the fetuses as another byproduct to make a little extra money.”

“ I see, so you guys are really doing a great service for these poor fishermen?”

I then jumped on my soapbox, ever so politely, and informed the woman about the current status of global shark populations. There is no way they are stocking shelves across the country with shark jaws and jars by just getting them as byproducts. The sharks are being targeted and yes, other parts may be sold, but it not the sob story she was telling me. She got flustered and finally ridiculed me for not caring about these poor people and hung up. I took a breath and waited. Calling back would not make a difference, but hopefully I had gotten into her head and maybe she would think a little differently. She is only a pawn and not actually the person giving the green light on purchases. I made a few other calls and the story was mostly the same, but her human-interest story was the highlight. I don’t blame her because she was obviously drinking the Kool-Aid being served to her, but it was insightful.

If you look at Holiday Souvenirs or Wonders of the Sea, you will see a wide range of dried and creepy animals. I grew up in Maine and deer heads or antlers are quite popular as interior décor, but I have never been a fan. Dried or dead animals are not something I want in my home and whether sharks are in trouble or not, who wants and animal fetus in a jar as trinket on the mantel? 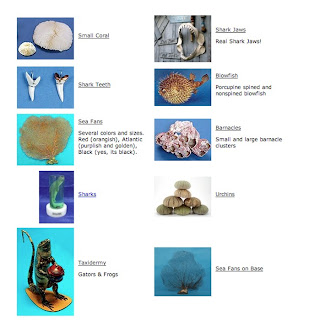 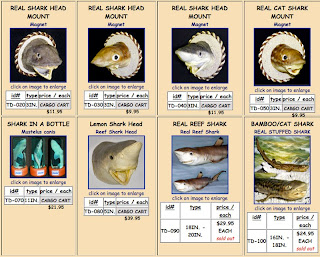 All of this relevant because you can speak up! As a consumer you have the right to know where products are coming from. Think about this the next time you go to the fish counter at your grocery store or the local fish market. Ask what the fish is and how it was caught. Now the teenager working the counter might not know, but someone at that store should or they should know where you could find out. You are not being rude or inappropriate; so do not be afraid to ask. Same thing at restaurants, find out where they get their fish? Is it really what they say it is? A recent study done by Oceana found a massive proportion of seafood in the United States mislabeled.

“Nationally, the worst offenders were sushi venues, where fish was mislabeled an average of 74% of the time, followed by restaurants with 38%, and grocery stores at 18%. “ I want to know what I am eating, don’t you?

You might be wondering how asking can make a difference? It will. Yes, you are only one person, but it adds up and one person becomes twenty very quickly and so on. Share this information with friends and family and encourage them to do the same. Write a letter or make a phone call to voice your concerns. They might be able to ignore one call or one email, but word spreads and they cannot ignore an onslaught of concerned consumers. I have seen restaurants pull menu items because of barrage on social media. One comment from one person multiplied and a change was made.

These are all actions anyone can take, but remember to be polite and do your research. Flying off the handle like a crazy person is not going to get them to listen. Believe me this is easier said than done especially when you are up against ignorance, as they say,” you can’t argue with stupid.” You will get frustrated and it might seem like a waste of time, but I assure you it is not. If you are not sure of what to say or write, there are a lot of sources online that can help. Make sure you get information and seek guidance from a reliable source. I was recently on twitter chatting about accurate information when it comes to shark education and conservation. I agree that people do not need to be experts or scientists to do their part for our oceans, but please get your information from a reliable source. There are so many groups and people popping up on social media it can be hard to wade through the muck and find the truth, but I assure you it can be done.Science and research provides facts to strengthen the fight to protect our oceans, but the masses can take this information and use it to change the demand.


For HI RES copies of these posters please email me sharkyjillian@gmail.com 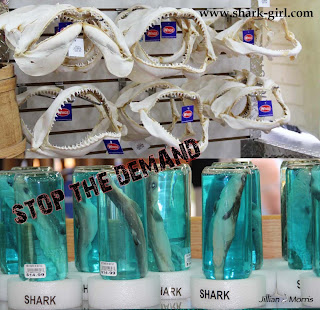 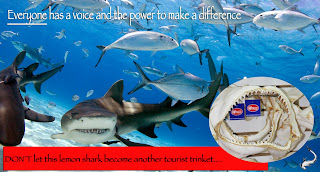