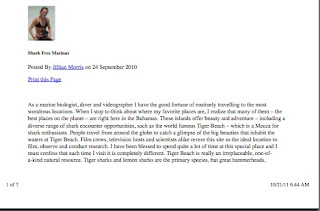 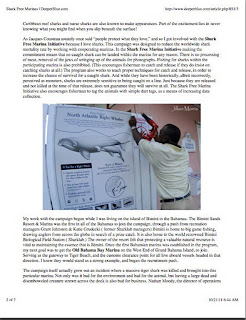 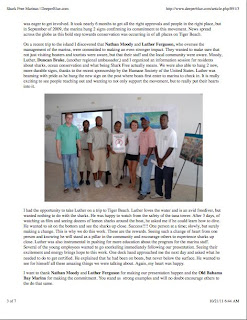 Posted by Shark-Girl at 7:07 AM No comments:

Articles, updates and other things.....

I have been away from the blog for a bit, but really want to start keeping it more up to date. 2010 has been a crazy and amazing year. Here are the links to several articles, posts and other things I have been working on. 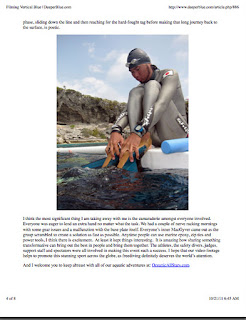 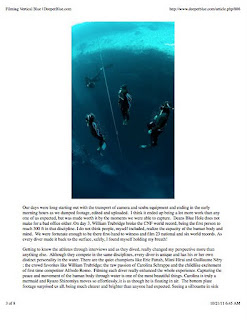 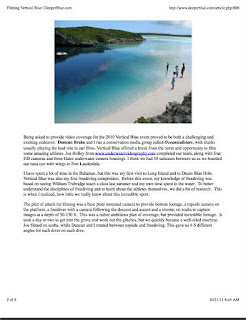 Posted by Shark-Girl at 7:27 PM No comments:

Please check out my article on the frigid winter we had in Florida this year. 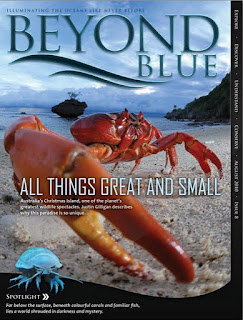 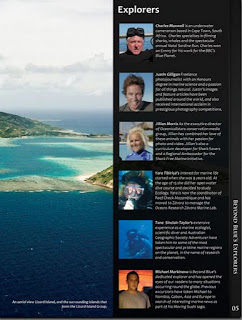 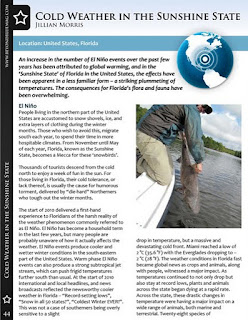 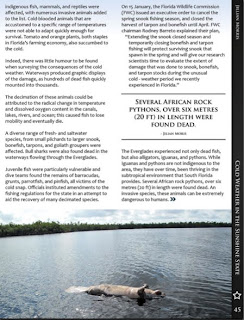 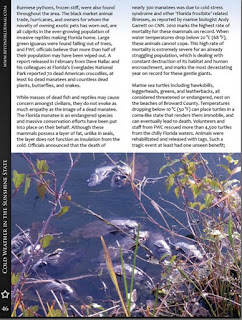 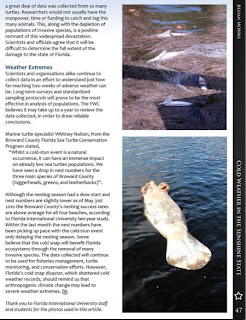 Sharks and Students: A recipe for Success

As a teenager I would have jumped at the opportunity to join a real research trip and possibly tag a shark. This is exactly what the University of Miami RJ Dunlap Marine Conservation Program (formerly South Florida Student Shark Program) offers. With Dr. Neil Hammerschlag and his team of interns at the helm, South Florida high school students are able join shark survey and tagging trips. The data collected is extremely valuable and encourages students to take an active role in current scientific research and education.

On Sunday March 14, I was fortunate enough to join the group to photograph and film the expedition. Joe Romeiro, of 333 Productions, was also on hand to capture images of the day. Leann Winn, one of the program’s members and a science educator at Palmer Trinity School joined us with some of her students. Our day started at Sea Base in Islamorada, Florida, where we loaded the camera equipment, fishing gear and plenty of frozen barracuda before heading out to sea.

The fishing site was selected because it offered calmer conditions; making the ride and work much more manageable. The fishing technique used is “circle-hook drumlines”, which is modified ‘hook and line’ that selectively targets sharks, reduces capture stress and duration, and minimizes the bycatch of other species. Circle hooks are used because they allow safe hooking of sharks in the side of the mouth, where they can be easily and quickly removed. This style of hook prevents foul hooking in the gut, which can be lethal for the shark. Each drumline has a large weight attached to a main line with surface buoys at the other end. A shackle attaches another line with a baited circle hook to the main line. This allows the shark to continue swimming regularly while hooked. The techniques and equipment used have been developed to minimize handling time, reduce stress and be as minimally invasive on the animal as possible.

While we waited for the lines to soak, the kids reviewed the techniques and equipment for the workup and jobs were assigned. It is important that everybody is organized and ready if there is a shark on the line. Efficiency is necessary in order to collect all the needed data and get the animal back in the water and swimming as soon as possible.  The workup of each shark includes measuring the length, taking a biopsy for mercury analysis, a blood sample and a fin clip for DNA, as well as inserting a roto and dart tag. These tags give each shark an identity and provide contact information if the animal is caught or found. Some sharks even get a satellite tag, depending on the research that is currently being done. The tags are not permanent and will eventually fall off, with the application area healing very quickly.


When the time arrived to check the lines everyone’s energy was high. For many of the students it will be their first time ever seeing a shark and you never know what might be on the end of the line!  Each line is checked and rebaited if there is nothing on it. This gave us 20 chances to catch sharks. Our first shark was a female black tip reef shark. She was quickly secured and the kids immediately went to work. Neil’s team removed the hook and in less than 5 minutes, of being brought onboard, our shark was swimming again. We were then onto the next drumline to see what was waiting for us!  At the end of our checks we had caught 3 nurse sharks, 2 black tip sharks and a black nose. I have to say I was slightly disappointed that we did not get a hammerhead, but it was still amazing to see these healthy animals. Those 6 sharks, although captured and uncomfortable for a bit, are apart of the greater good for the oceans. They are ambassadors for their species and for all sharks across the world. The 2 black tips brought a lot of excitement because they were both females and both possibly pregnant.


Obtaining data from female sharks is extremely valuable. It provides information on mating and birthing behavior, data to support protection of breeding and nursery areas, and encourage regulation of fishing seasons so breeding animals are not being targeted and removed from the stock. Data collected on these trips will hopefully help put legislation in place, as seen with the recent protection of lemon sharks in Florida waters.

Every student on the boat left with a huge smile and a better understanding of the ocean. It is always amazing to see the science world connecting to the average person, especially younger generations. Making a connection to these animals at an early age is vital to changing perceptions. Not every student that goes through the program will become a marine biologist, but hopefully they will all be marine advocates.

For more information check out www.rjd.miami.edu