Young Ocean Advocates: Your Voice Will be heard

I met Sander Elliott and his family on a shark diving trip in 2010. Sander’s pure love of the ocean is why I work with kids as often as possible. They have an amazing energy, which if harnessed, would ultimately change our world. Along with Sanders enthusiasm, the support from his dad and soon to be stepmother was incredible. They are continuing to support his passion and guide him in ways to step up and make a difference. Children often times feel as though they are too small or too young for anyone to take them seriously. Everybody, young or old has a voice; it is just a matter of how you express that voice in order to be heard.

When we are young we do not have all the answers or much life experience, but we know when we feel something. We may not now how to express it or how to make change, but if we have the tools then we can have an impact. Parents, teachers and family members can at this point play and extremely integral role in nurturing that energy and helping to find an appropriate outlet.

I spent my day with Sander chatting about diving and sharks. I love these moments with kids because they always remind me that there is hope. There is hope that people are inherently good and that people will save the oceans. We must all hold onto that spirit of hope in order to push forward for change. Nothing happens quickly, but we must stay faithful in our belief that we are having a positive impact.

I received an email from Sander’s father Jason regarding a cruise they had been on. The Carnival Cruise menu included shark and this really upset Sander. He expressed his concern to his dad and Jason said, “ well let’s do something.” Sander drafter a letter, seen below, to Carnival Cruise Lines and expressed why he felt it was unnecessary to have shark on the menu. The letter is beautifully written and I am proud to share it with you. We are still waiting on responses to his letter and my follow up letter, but that is no reason to be discouraged. They are a massive company, with no doubt a lot of comments and complaints passing through the system. Getting the attention of cooperate giants take a lot of work and this is just the start. We are spreading the word and Sander is setting an example that yes, kids can take a stand.


Hopefully people that read this will take time to write or letter or share their own experience. Letter writing does make a difference and can be a very powerful tool. Not only at the getting the attention of the company or person you are approaching, but educating others around you. Money runs our world and the almighty dollar can play a huge role in making changes. If people are aware that shark is being served because they read Sander or someone else’s letter, maybe they will think twice about booking a cruise. There will be no instant gratification, but it sets the ball rolling. Who knows it might reach the right person and make them think twice, sometimes all you have to do is ask?

Kids, don’t be afraid to use your voice. Parents, if your child is concerned about something, help them find the best avenue to express their ideas and concerns, you never know, you might even learn something.

Thank you Sander for being an ocean advocate and not being afraid to fight for change! You are the future and do not for one moment think that your opinion does not matter.

Thank you also to Incredible-Adventures for giving Sander the opportunity to see sharks up close.

My name is Sander Elliott and I am twelve years old. I am writing because I want to share some important information about sharks. I believe it is important that cruise lines and restaurants stop serving shark. Since Carnival is a large, important cruise line you could be an influential character in the movement to save the sharks and then help save the ocean, which Carnival and people depend on. Here are a few important statistics about sharks:

• Research shows that scalloped hammerhead and tiger sharks in the Atlantic ocean have likely declined by more than 97 percent; bull, dusky, and smooth hammerhead sharks by more than 99 percent.
(Science Daily, http://www.sciencedaily.com/releases/2007/03/070329145922.htm)

• Sharks are in trouble on the Great Barrier Reef, have almost been eliminated from the Atlantic Ocean, and are a regular on the endangered species list (I know that Carnival often sails in the Atlantic and if Carnival stopped serving shark it would help the sharks and the ecosystem come back and set an example for others to do the same).
(Science Daily, http://www.sciencedaily.com/releases/2007/03/070329145922.htm)

• The smooth hammerhead, Shortfin Mako, common thresher, big-eye thresher, silky, tiger, bull and dusky are going to be added to the endangered list. There are already 126 species of shark on the endangered list and the number is going to rise. Shark populations worldwide are at historical low levels due to serious over fishing.
(The Guardian, http://www.guardian.co.uk/environment/2008/feb/18/conservation.aaas)

• Also it is generally not a healthy choice for your customers to eat shark species (including dogfish) due to elevated levels of mercury.
(http://www.montereybayaquarium.org/cr/SeafoodWatch/web/sfw_factsheet.aspx?fid=103)
I believe that my suggestion to stop serving shark would be a good choice for Carnival Cruise Lines because it would show that you care about the oceans and the health of your customers. I really appreciate you taking the time to read my letter and I hope that you will consider my request. 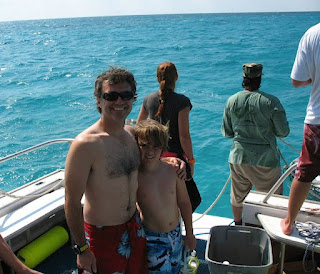 Sander and Jason diving at Tiger Beach, The Bahamas