On this second day of the new year, I am being attentive to my blog. I am at home in NH where the ground is white with snow and the house is cozy ( fireplace and hot tea included). I am heading back to Florida this week to prepare the first Bahamas trip of the year. Reflecting on 2010 and excited about 2011.


2010 marked a very busy year for us and 2011 promises to bring more adventures.
After a whirlwind tour of Ireland, England, Scotland and Spain we headed back to New England for some really winter weather! Lots of snow!

February took us to New Zealand to film and and to also be on camera talent for National Geographic’s series Hooked. We spent nearly 3 weeks in New Zealand filming marlin, bronze whaler sharks and other big fish. This included 5 days on a boat around the shores of Three Kings Islands. It is here where 2 oceans come together and the wildlife is incredible! New Zealand is rugged and wild...and they have pink sheep! 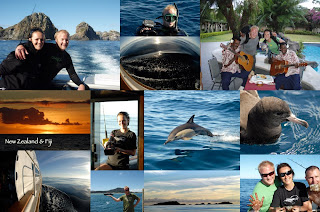 In March we dove into reality TV and filmed Kourtney & Khloe Kardashian doing a discover scuba for their show “ Kourtney & Khloe Take Miami II. Random shoot with mega yachts and mansions on South Beach. Not our typical gig, but definitely a fun one. Duncan was awarded a new diving BC for winning the Shark Trust 2010 video contest with footage of a lemon shark giving birth!

April and May were non stop, as we headed to Long Island in the Bahamas to film the Vertical Blue Freediving Event at Dean’s Blue Hole. Here we saw National and World Records fall, including William Trubridge’s swim to 300 ft on a single breathe of air without using fins. With only a day in Miami, we were off to Belize to help with the annual Glover’s Reef Shark Survey. Here we tagged sharks, as well as filming the research station and the work that is being done there. The people of Belize really understand how valuable the ocean is and we loved every minute of our time in the country. 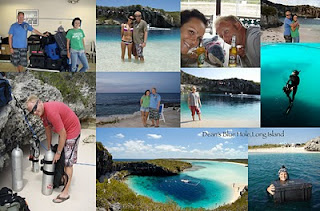 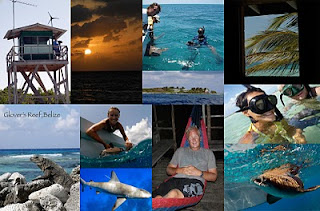 June was filled with time on Grand Bahama island and several trips to Tiger Beach, one of our favorite places on the planet. This island has become our second home and we have even moved some of our belongings there. Wishful thinking I guess....
I also suffered a nasty spider bite ( grrrr) which I self diagnosed. Antibiotics and a little field medicine and I survived. The scar is pretty minimal considering the hole it left in my arm. I dive with sharks for a living and a spider got me! 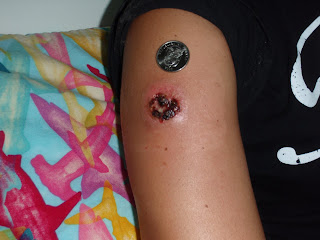 July also included a trip to Grand Bahama and more TIGER SHARKS!! Explored the West End and found some amazing dive spots. Healthy coral and lots of critters. This month I was also asked to be an advisory board member for the Shark Free Marina Initiative. This is a campaign that we have worked with since its inception and are very passionate about. It prohibits fisherman from bringing dead sharks into the marina. It is designed to encourage catch and release if people insist on fishing for sharks. 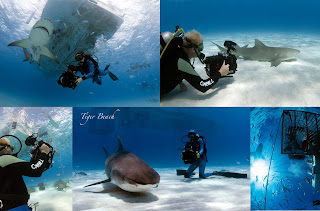 August: Back to shooting random reality TV. We filmed an auction of very expensive items from a man imprisoned for a Ponzi scheme. This included a Bugatti Veyron, the world’s fasted production car. Only a cool 1.5 million for this rare automobile. It sold for $850,000 at auction, so I guess that is a deal? Only 5 in the world and it is definitely a pretty car. I then headed north to see the family and Duncan hopped across the pond to see his. While home I spoke to 6th graders at Berwick Academy about sharks and why we need to save them! I love going into the classroom! Such inspiration.

September we enjoyed the leaves in New England for a bit and then headed back to Miami. A day in Florida and then back to Grand Bahama for a shoot at Tiger Beach with a German film team. Lots of travel.

I celebrated my 29th birthday on the island with some of my best friends, big tiger sharks, fancy dinner on a yacht and a birthday tiara. Eeek almost 30! October also marked the loss of my grandfather. I was able to see him twice this year, which is rare, but was precious. Norman Watters you are in my heart and will always be in the sea with me. This brought Duncan and I back to Maine to help my grandmother for a few weeks.

November was probably the most hectic and incredible month of the year. Duncan kneeled in the Atlantic Ocean at Long Sands Beach in York, Maine and asked me to marry him!!!! This was after he convinced me to take my shoes off and see how cold the water really was. I am a sissy now about the cold. Island life has ruined my tolerance. I am glad I ventured in. Then on Nov 27 Duncan headed to Hobart, Tasmania to begin a 3 month shoot in Antarctica for the Animal Planet show Whale Wars. I was a bit disappointed as they don’t hire women to film... is this 1950s? The Sea Shepard boats go down to protect whales from the Japanese boats that say they are collecting scientific samples. It is a radical movement, but is making a difference. 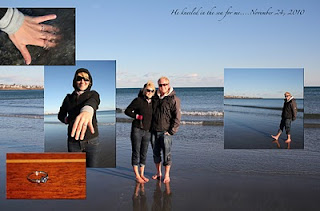 2010 was also busy with articles& photos in Deeper Blue, Shark Savers, Make a Wish, Bahamas National Trust, Bahamas Daily News, InStyle Magazine, Hawaii Skin Diver Magazine, Shark Diver Magazine, Beyond Blue, Women’s Adventure Magazine Winter Issue and one in GAFF Magazine that highlighted our sharky adventures as a couple. Duncan even took my last name for the piece. A good story for our kids one day. 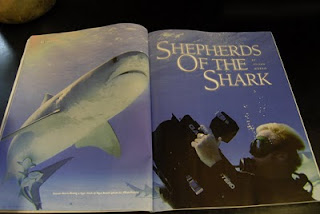 I am excited for the adventures that 2011 has in store. Bahamas, Australia, Fiji and England are planned and numerous other projects are starting to fill up the time.
Energized and passionate, I am jumping head first into several major conservation projects and this makes my heart incredibly happy.

Jillian
Posted by Shark-Girl at 8:28 AM