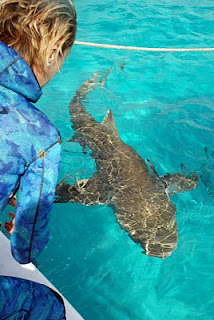 Just returned to Miami after my first trip to the island this year. It was wonderful to be back, as I always feel like I am at home there. The weather was a little chilly, but it is winter after all. It was a shorter trip than usual because 2011 is already busy busy, not that I am complaining. The purpose of this trip was to take WWE wrestling legend, The Undertaker on a private trip to Tiger Beach. I will admit that I am not a wrestling fan, but I do remember my male friends LOVING it as kids. The Undertaker was a character that I knew. I immediately worried about him getting a wetsuit and being comfortable in the cage. He is 6’8 and a rugged guy.

We met in the morning just before departure and Mark quickly warmed up with conversation. He is very passionate about what he does and has committed a better part of 25 years to it. He is a certified diver that has broke the surface in places that are high on my To Dive list. He was excited to get back in the ocean after a long dry spell. The lemon shark welcome committee wasted no time in making our new guest feel at home. There is such a charge of energy when that first shark arrives. 1 by 1, the troops appeared and before long we were in the cage with 10 lemons swimming around. 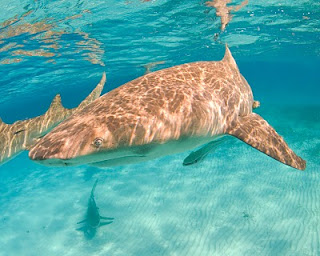 As an instructor, you are trained to read people’s eyes. This let’s you know how they are feeling in the water. The Undertaker was like a kid on Christmas morning. He was the same size as many of the lemons, but there were a few 8 footers that made even him feel small. His son climbed in and together they watched these amazing animals weave in and out around the cage. Both of them were smiling, trying to keep their regulators in. I love these moments!!!! 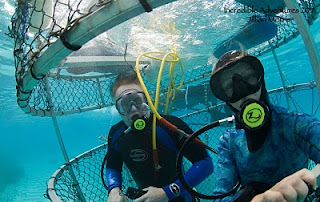 Then the dark shadow appeared. Our first tiger had come to the party. I immediately recognized her because of the mangled right jaw; a souvenir left by someone’s hook.
She is skinny compared to the other ladies of the beach and is rather skittish. Such a beautiful and powerful animal, fearful and uneasy. This is the capacity that humans have. We are are able to reduce these incredible creatures to a state of fear, or even worse, a jaw or fin. My dive team was excited and watched as she moved in and out of sight, ever cautious.

I counted 15 lemons and our tiger at one point. A beautiful day at the beach! Mark was thrilled and couldn’t believe how close they came to us. Exciting to see someone who has traveled the world and accomplished some incredible things, so amazed by sharks.
Another rewarding trip and some new shark enthusiasts heading out to share their story. 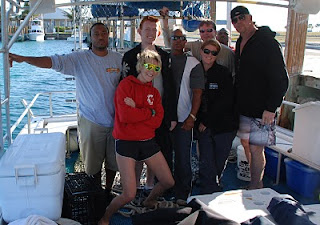 Thank you to Incredible Adventures for making the trip happen.
Posted by Shark-Girl at 8:05 AM