This past week was SHARKTASTIC and I didn’t even go in the water. On Saturday January 29, I was able to join the RJ Marine Conservation Program and students from South Broward High School for a day of shark tagging. This program creates an opportunity for high school students from South Florida to get in the field and experience the work of a marine biologist. Living in South Florida, we are blessed with the Atlantic Ocean in our backyard. It is an amazing natural resource that needs to be protected. 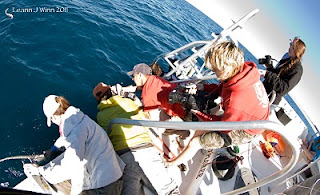 We had a busy day on the boat with 5 nurse sharks, 1 tiger shark, 1 scalloped hammerhead and 5 great hammerheads! The project uses drum lines to fish for the sharks, as this allows the animal to move once it is hooked. The standard work up of a shark includes 3 length measurements ( 2 on a nurse shark), determining sex, taking a DNA sample, a biopsy, taking blood, tagging the animal, removing the hook and releasing the animal. 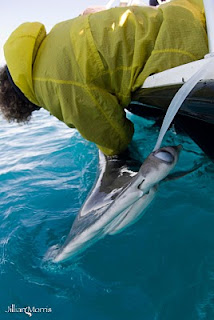 The DNA sample is taken by clipping a very tiny piece of the dorsal fin. ( Think clipping your nail) 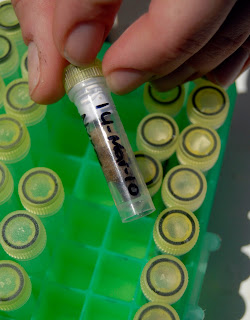 A male shark has 2 external sex organs called claspers, which are extensions of the pelvic fins. A blood sample is taken from soft tissue near the caudal end of the animal. A biopsy sample is taken beside and below the dorsal fin. The animals are given different tags depending on the species being studied and what data is being collected. The great hammerheads were each equipped with a satellite tag that will allow researchers to track there movements as well as allowing students to check in on the sharks via the internet. Spaghetti tags provide a basic ID for the animal and can be used if the animal is captured again.

Our tiger shark was also given a satellite tag to track her movement. Sharks heal incredibly fast, so their new equipment does not hinder their ability to function. 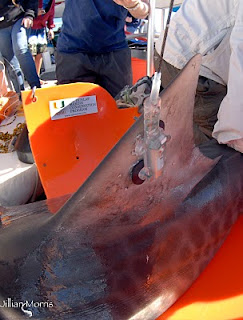 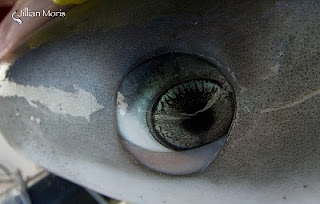 The entire work up is done as efficiently as possible in order to reduce the stress on the animal. Although many people see sharks as monsters, they are in fact highly sensitive creatures and can die simply from the stress caused by being hooked. Dr Hammerschlag and his team move like a well oiled machine and can complete the entire process in less than 7 minutes. It is beautiful to watch science in action and know that each animal is increasing our knowledge about sharks as a whole. It is a long day on the water and despite sea sickness and sunburns, the kids walk away with smiles. They are eagerly snapping photos as they wait their turn to assist in the workup process. I still remember the first time I touched a shark and I am guessing that most of these students will as well. 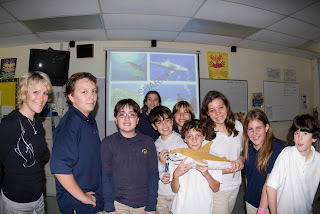 2 days later I found myself at the Palmer Trinity School in Palmetto, Florida as a guest speaker on sharks. I presented to 6 classes of 6th graders and a single oceanography class. The 6th graders could hardly contain their excitement and soon rumors of, “ the best class ever,” were spreading around the school. Their energy is inspiring and I always try to focus upon these experiences if I get frustrated with unfavorable conditions for these animals or the politics that can arise within the shark world.

For this age group I start off with the image below and ask the kids if they think it is real. Most say no, but there are always one or 2 that say yes. I imagine in a room full of adults, the opposite scenario of responses might be true. I then segue into what really counts as a shark attack. We talk about mistaken identity and how often times we don’t get the real story. 5 people were killed by sharks in 2009. A disparaging contrast to the 100 millions sharks that we killed. Finning, by-catch, commercial fishing and use in “ health” products are the biggest enemies of sharks. I also like to point out that there were 43,00o toilet related injuries in the US in 1996. Yes kids, your toilet at home is more dangerous than any encounter you will ever have with a shark. This gets a laugh and gets them thinking. The danger in our everyday lives is far more prevalent than any experience with a shark is or would be. 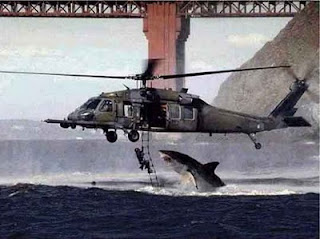 I move on to understanding sharks as apex predators and why they are crucial to the survival of our oceans. It is not just that I am obsessed with sharks, but the fact is that the oceans WILL die without them. This effects every single one of us. I talk about tagging and pass around some tags and a circle hook that is used for catching sharks to minimize injury. I use lots of images as a way of getting the kids excited. The video of a lemon shark giving birth elicits a lot of “ewwwws” and, “ gross,” but it keeps them wanting more. I talk about my experience photographing and filming and then finish up by offering suggestions to things that they can do. It is important to remind them that even though they are young, they have a voice and they can make a difference. They can go home and talk to their family about why sharks are so important. They can encourage older family members to recycle and make smarter sea food choices. They can go for a snorkel or visit an aquarium. When they start to think about these things you can see the level of enthusiasm build and you know the future of shark conservation is developing.

Just prior to my trip on the boat, a well known shark diving operator was air lifted to a hospital in Florida after suffering a shark bite in the Bahamas. Immediately my inbox began filling and I received several phone calls. I commend Jim Abernathy on how he handled the media frenzy. He is a true advocate for these animals and will be back out on the water as soon as he can. When you spend enough time around any wild animal it is like being a chef; eventually you might get burned. Things happen, but we cannot destroy a creature of let the media run rampant with glorified hysteria. We must remain true to what we believe about these animals and continue to push for their protection.

It has been a sharky week and I am preparing for my next adventure.....Australia here I come.
Posted by Shark-Girl at 8:52 PM