A Sharky Pirate in Neptune’s Army

I am at the Fort Lauderdale airport enjoying the free wireless, thankful for the fact that I am not at MIA. Miami International Airport is like a vortex of delayed flights, lost luggage and the world’s largest gathering of rude people. Sorry- just venting a bit and karma will probably send my bags to Peru. I am flying home to spend a week with the family before heading to the land of Vegemite, koalas and Men At Work. I will have plenty to write about that impending adventure in the next blog, but for now I am writing about Sea Shepherd.
.
Many of you may know where Duncan has been since Nov 27 and others may not. On November 27 I said goodbye to my pirate as he boarded a plane for Tasmania. He was on his way to join the Sea Shepherds as part of the film team for Animal Planet’s Whale Wars. Each Winter Japanese whaling vessels travel to the sanctuary in the southern ocean to collect whales for “research.” Please note I said WHALE SANCTUARY. For most people this would mean a protected area. Down in the raw wildness, however, this means war. The whale meat from animals taken is sold on the Japanese market for very high prices. I dare to boldly say, that there is nothing that even closely resembles research being done. Whales are harpooned, drowning in their own blood before being dragged aboard the factory ship to be processed. 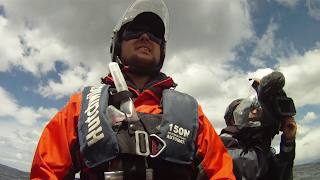 Operation No Compromise marks the 7th campaign that the Sea Shepherd organization has launched against Japanese whalers in the southern ocean. The fleet; Steve Irwin, Bob Barker & Gojira departed Hobart on 2 December to make the long journey to this inhospitable environment. On a mission to defend whales, this daunting task puts lives in danger and stirs a lot of strong opinions in people. I myself am more of a local and grassroots conservationist, but Sea Shepherd is drawing attention to a major global issue. They are criticized for their extreme tactics, but at the same time they are making a strong impact. This radical activism is not for everyone but it holds an important place in the conservation movement.

I will admit that Dunk’s involvement has triggered my curiosity beyond general knowledge of the organization. I finally read the copy of Whale Warriors that has been sitting on the shelf for a few years. Author Pete Heller joined the crew of the Steve Irwin in 2005 and became immersed in the battle at the bottom of the world. I finished it in 2 days. It gave me a great insight into the world that Duncan will be calling home until mid March. I check the website each day, as his emails and intermittent satellite phone calls do not allow for many details. Duncan is a meat & potatoes loving Scotsman, but is actually enjoying the vegan menu. He said the people are some of the most passionate he has ever met and each one has a unique story. They celebrate life and become a family during their 3.5 month boat campaign. 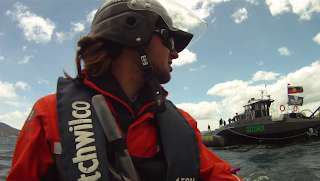 If you have never spent more than a day on a boat, or even a week, then you cannot really comprehend what LIVING on a boat is like. Not just any boat, but a boat that is facing 20 ft seas, freezing water and massive ice bergs. There is never a solid moment and you body must adjust to being in perpetual motion. Meals become an adventure as you are forced to hold onto your plate while trying to eat. Privacy is no longer a word you know, except for a few moments in the head (bathroom on a boat). Whether you agree with the cause or not, at least respect the challenges this crew is facing and their determination.

Duncan is sharing a room with 4 other vegan men and they only get a 3 minute shower every 3 days. Imagine sleeping in your locker room for days and not showering after games. Not appealing? Maybe this is part of the reason that there are no women on the camera teams. No, probably most woman would not rank this at the top of their desired vacation experiences, but I would. There are numerous female crew members on the vessels and to be honest; I would be there in a second. Obviously it would be amazing to share the experience with Duncan, but beyond that the devotion of people, the animals and the time in a place on Earth that very few people visit. Duncan has seen massive ice bergs, pods of orcas cruising by, leopard seals, dolphins and lots of whales. The daylight seems endless in this place that is 18 hours ahead of us. When we spoke today it was midnight there and he was watching the sunset.

The Japanese got a late start this year and they are way below their quota. 2 of the harpoon boats have been on the constant trail of the Steve Irwin and Bob Barker, meaning they are moving too fast to hunt for whales. On January 25 (AEST) Steve Irwin caught up with Nisshin Maru factory ship; where the captured whales are dragged aboard and “studied.” This cat and mouse game has high stakes on the high seas and is not just dramatized for television ratings. It is very real. The danger is real. The whales are real. The people are real. For full details you can check out the website, as their first hand accounts are better than anything I can try to express.


It is not certain when the Japanese will call off the hunt, but as of January 23 there were 54 days left in the “whaling season.” The world is watching and wondering if this will be the last battle. Negative attention is weighing heavy on Japan and pressure is increasing for them to end the unnecessary killing. Whether you agree with Paul Watson and his aquatic army, they are making the world aware of a horrific crime that was slipping below the radar for many years. I am a big believer that EVERY ONE of us can do SOMETHING!! Get canvas grocery bags, stop eating tuna, ride your bike to work 1 day a week, recycle your bottles and cans, reduce the amount of plastic you use, plant a tree or a tomato plant. You do not have to travel to the ends of the Earth to have a voice or make a change. Your own back yard needs it just as much.
Posted by Shark-Girl at 10:30 AM