The Best Shark Dive on the Planet 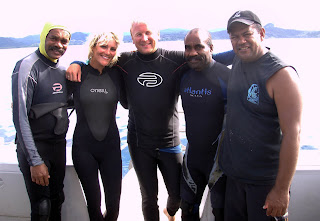 Fiji’s Beqa Lagoon is home to one of the most exciting shark diving Mecca’s in the world. Located off the southern tip of Viti Levu Island, it is possible to see 7 species of sharks on one dive in this tropical paradise. Our holiday in Fiji was not planned around diving, but this was the one dive that was an absolute must. After we surfaced, however, we realized one was just a tease. We chose Beqa Adventure Divers because we had met them and also knew about their involvement with the Shark Free Marina Initiative. For a small island nation, Fiji has 25 marinas signed on and is continuing the push. There are other dive operators, like anyplace, but we always like to dive with people who respect the ocean and are taking actions to protect it. Mike Neumann and his team, work as a well oiled machine from start to finish. They are a group of passionate people who love sharks and love the ocean. Each person we met had a smile on their face and made us feel like we were all old friends. There are not many places in the world that you can find this kind of experience, either topside or beneath the surface.

I had been dealing with a tooth issue that was causing pain in my left ear, but wanted to make the dives anyway. We loaded our gear and boarded our vessel. The entire dive crew is Fijian, which is a nice change from the typical expat contingent at most operations worldwide. A short boat ride to the site and it was go time. We geared up and slipped into the sea. I made it to about 20 ft before my ear started to feel like my head would explode and opted to hang out and work on clearing. I did this while watching a feeder work with a large group of white tip and black tip reef sharks. I was really excited because this was my first time seeing a white tip and they were high on my list. They have a very cute face and I sat for probably 30 minutes watching them weave in and out, cruising right over my head.

Duncan made the deeper first dive and watched as dozens of bull sharks weaved in and out. The stop there was quick due to depth and Mike put on a special show for Dunk after the other divers began to ascend. Duncan was still wide eyed during our surface interval, not believing what he had just seen. The second dive was set for 50 ft where the bull sharks would be hand fed. This is what we had been waiting for. I made my descent a bit slower and muscled through the pain. I had traveled this far and damn it I was going to see this spectacular underwater show. The dive team moved us into position and then the world, as we know it stopped.

Lined up in the best seats in the house we watched as at least 40 massive bull sharks were circling in front and above us, a site that would normally be the stuff of nightmares. By massive I mean 10-12 ft and fat. They breed some big healthy sharks in those waters. The biggest, fattest bull I have ever seen would be the Kate Moss of sharks in comparison to this brood. Similar in movement to the Caribbean reef shark feeds in the Bahamas, the animals move in one at a time to take a fish. There are hundreds of giant trevally and other fish in the mix, but the space where the feeder and sharks interact is like a beautifully choreographed ballet. Watching Rusi with the animals was by far one of the most mind-blowing things I have ever witnessed. To see an underwater tank of a shark and this man, a man on borrowed air and in their world, share a connection, still gives me goose bumps thinking about it. Each shark slowed down momentarily before delicately taking the fish from his hand. There definitely exists an understanding between 2 creatures with every reason to be mortal enemies. Humans are killing millions of sharks each year and most people are terrified of sharks. Here on this small reef, man and animal are moving together as one and stereotypes, fears and hate do not exist. I only looked up a few times and all I could see was sharks. There was no time to feel fear, because I was in absolute awe. Duncan and I spend a lot of time in the water with sharks, but there is nothing even close to what we saw, felt and experienced in Beqa. I am still having trouble wrapping my head around it.

Mike Neaumann and his team are incredibly professional and passionate. They have a system that allows divers to safely and respectfully watch these animals. $20.00 from each diver goes to the local village to help provide food and pay for schooling. This keeps the locals from fishing at the reef and allows the marine sanctuary to stay healthy. I cannot find the words to express our gratitude for this once in a lifetime experience but I will say next time we are doing at least 5 of these dives and bringing our cameras. Yes, that’s right, Duncan and I did not bring a single camera on the dive. We sat with unoccupied hands and saw first hand the most exhilarating underwater show on the planet. For more information please check out Fiji Sharks
Posted by Shark-Girl at 5:45 PM