Time to be a Tourist

Duncan and I have managed to remain under the radar as tourists in Fiji. We have done our own tours, visited the markets when we wanted and explored outside the suggested snorkeling area. This is who we are. Crammed on a bus with 50 other sweaty and sunburned tourists is not our idea of a good day; so we did exactly that. We broke down and booked a day cruise. Captain Cook’s was the most advertised company, but with a passenger size of 100 we opted out of the cattle boat option. A review for Whale’s Tale raved about the service and reflected the only distasteful element was a drunken karaoke broad that had to be tied down, as to not fall overboard. I would consider that free entertainment. The other enticing elements were the visit to a private island and all your alcohol and meals included.

We made our way to Outrigger to be picked up and laughed as a massive coach bus pulled up. I felt as thought I needed a large brimmed sun hat and my fanny pack. We quickly boarded, grabbing a seat near the front, already plotting our immediate escape upon landing. We enjoyed the quiet ride as the lush countryside passed by our window. I think Duncan was pleased to not be avoiding potholes, pedestrians and the steady parade of livestock that we encountered on every drive. About 15 minutes into the hour-long ride our peaceful cruise was interrupted by long bus ride a proper Aussie Shelia sat directly behind me. Her assessment of life in Fiji was broken only when she threatened to slap her child, who was messing around with the camera. When that was not effective, she informed the child that she would be left on an island in Fiji. Well done. We hoped she wasn’t on our boat.

Arriving at the port we filtered off the bus. A man from Whale’s Tale was waiting and gathered us away from the masses. There were about 20 of us, as the 50 or so other passengers made their way to Captain Cook’s. Nice! We headed down the dock to find our vessel. The Whale’s Tale is a traditional old schooner that is a bit rough around the edges, but exactly what we were hoping for. We were greeted and pushed into the mess for breakfast and champagne, with champagne being the priority. 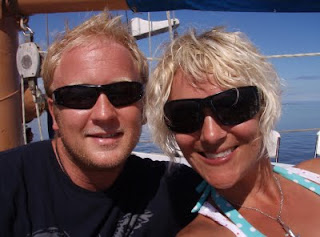 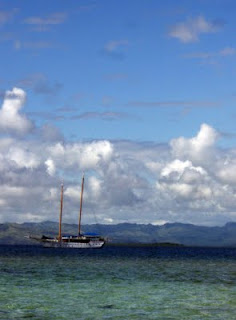 Our guide, announced with a grin that we would be cruising for 90 minutes,” Fiji time,” to our island. There we could snorkel, fish, kayak or lay in the sun. There would also be the option to walk around the island, which we did in approximately 3 minutes. Champagne and rum flowed, as guests began to lubricate themselves. Dunk and I took it easy because we wanted to get the full experience of the kava ceremony awaiting us on the island. A young honeymoon couple asked us if we had tried it, describing the experience as ingesting dirty water with the effect lasting only a few moments. The newly married guy was named chief of our group and offered the first bowl. Kava is a root that is dried and then ground up. It is said to relax the body and cure all sorts of random ailments. It also leaves your tongue and lips tingly from temporary numbness. 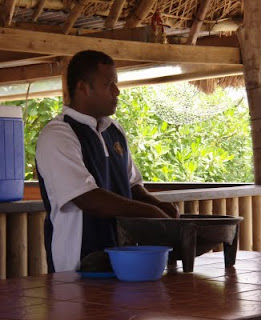 Around our group of 25, the bowls were passed with each person clapping once, saying bula, drinking and then the group clapping 3 times. You could tell that our guides were not just doing it as some ridiculous interpretation of the culture, but were proud of their heritage. 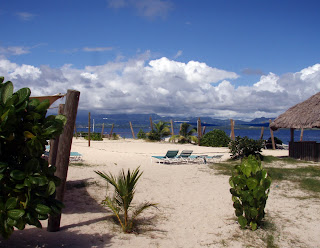 A guided snorkel followed the kava. People seemed impressed that Dunk and I had our own gear. We guessed that the provided gear would be from the “my first fin collection,” of which we are not fans. The guide floated on a pile of lifejackets incase someone became incapacitated or the rum kicked in. As we cruised out most of the coral was bleached and a bit ratty. Once in deeper water, Dunk and I began to freedive and explore the caves and crevices. I spotted at least 20 anemone fish on one area and 3 new species of butterfly fish that I had not seen. The guide showed us a type of coral that changed color when touched. Something I was amazed to see, but also thinking that a guide should not be molesting the already struggling corals. We popped up and down, wedging our faces into crevices to see what critters were hiding. I lost the group following a pair of butterfly fish I had not seen before. Happily we left the world behind as we submerged ourselves into the ocean. Time stops and nothing matters; the quiet stillness filled with life is intoxicating. The guide signaled that is was time for lunch. We slowly followed the group, in no rush to leave the quiet beauty of the sea.

At lunch we were approached by several other guests and asked about our diving, what we do and how we hold our breath. Apparently we were as exciting to watch as the fish and we had been completely oblivious to such observation. We happily chatted with our new friends and enjoyed the amazing spread of Fijian delights. After lunch we did a lap around the island just to see the whole thing and then returned to the water. Floating along and feeling the ocean against our skin as Duncan did his best Jack Sparrow impersonation asking, “ but why the rum was gone. “ Soon it was time to depart from our private island and board the love boat once again. 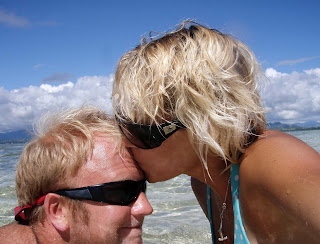 The ride home was filled with more of the guests approaching us and waiting for story time about our adventures. This was interrupted as the crew pulled out the guitars and sang for us. The rum flowed and even the captain was bringing Duncan drinks. Dunk was referred to as Scotland by the crew from the moment we stepped on the boat and within 5 minutes we no longer had to get our own drinks. Magically our glasses were always full, a dangerous luxury. A rendition of “ Brown eyed girl,” made my heart smile. This song follows us around the world and always makes me think of my dad; I am his brown-eyed girl. We laughed and sang along as we passed a chain of small islands on our way back to port. Duncan was recruited to solicit for tips and happily meandered to each guest and held out his “ crew appreciate jar.” It was very sweet and he was proud to help out these amazing people. Not once did the smiles leave the crew’s faces. Our final song was the anthem of Fiji, which they did acapella. The people of Fiji are beautiful and wow, can they sing! 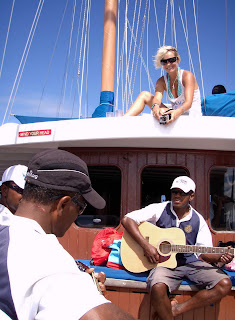 We pulled up at the dock and the Captain Cook vessel was parallel to us on the next dock over. She is the same size vessel, but stuffed with 100 people. Not many of them had smiles on their face, while everyone on our boat had a warm glow. (most likely due to the copious amounts of rum) We made our way back to the bus, while the crew tried to fill a couple of to go cups for Scotland and his bride. Crammed back on the bus we waited, as there were more people than we started with and many of them not familiar. Finally about a dozen people realized that this was not the bus to their resort. We had 3 young Aussie blokes that were well lubricated with rum, sitting around us. We were invited to a party back at the resort. Before I knew it Dunk was involved in a male only contest of best feet, best hands, best elbows, before it went south as there was an awkward moment when the emcee announced best nipples as the next category while he thoroughly examined himself. The gig was up. Not sure how Dunk managed to join, but I believe the rum was a key factor. It did make the time pass quickly and we soon pulled up at the Outrigger. We had survived an entire day of being tourists and actually had an amazing time. We capped off the evening with some dinner and an impromptu Polynesian fire show. Always a random adventure.
Posted by Shark-Girl at 8:21 PM