I love it when people use the phrase,” shark infested waters “ to describe the ocean. Am I wrong or shouldn’t the oceans be shark infested? Where else are they supposed to go?

In recent news, what would have been a heroic feat for swimmer Penny Palfrey became a circus when accompanied by the gruesome slaughter of 3 oceanic white tip sharks. The record was set by the 48 year old as she swam 67.25 miles between Grand Cayman and Little Cayman islands.

One of her crew members, Charles Ebanks , a notorious shark hunter, stepped up to her “rescue” and baited in the killer sharks. He then proceeded to use a machete to kill them once on board his support boat. This has sent the conservation world into an uproar, rightly so. According to the IUCN (International Union for the Conservation of Nature) Oceanic white tips are listed as vulnerable, but like so many species of sharks the extent to which they are threatened is underestimated. This also comes in the wake of massive campaigns to protect sharks in other regions of the Caribbean. 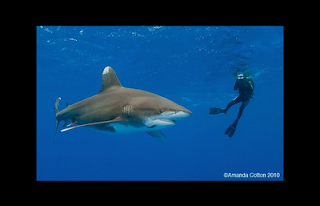 I did some research wanting to see what the swimming community had to say and found a very interesting perspective on a site called “The Daily News of Open Ocean Swimming.” “The four separate sharks encounters were nearly shark attacks if not for the heroic actions by Charles Ebanks”. When did slaughtering an animal in its natural environment become one of the defining characteristics of a hero? I must have missed that. I was happy to see that comments to the post included anti shark killing sentiments. One anonymous poster wrote, “Depending on the reports you read, the 'heroic' Charles Ebanks butchered either three or four sharks to death with a machete, those sharks being officially 'threatened'. Well, they were certainly threatened by this record.“

I also reached out to a close family friend; former professional triathlete and now open ocean swimming coach. I was intrigued to hear what she thought of the articles and the incident. I think she summed it up best in one sentence. “Part of the challenge is conquering the elements, not killing off the obstacles.” Unassisted swimmers have strict guidelines and killing off sharks seems to be anything but “unassisted.”

The media has praised Palfrey for her bravery in “shark infested waters,” but how is 3 to 4 sharks considered an infestation? I don’t even think people would call an exterminator for 3 cockroaches in the house? Being from Maine I have had a “mosquito infestation” ruin a perfectly good evening barbeque, but there were 3,000 mosquito’s not 3. I guess there are more exceptions to the rule of the definition than not. Is it fear and ignorance that reduce the number of animals required for an infestation? I guess the phrase is used as a negative, but we should be so lucky as a planet to have shark infested waters. To me, 3 oceanic white tips would be a once in a lifetime encounter, rather than the nightmare it has been described as.

Ironically people are paying thousands of dollars and traveling from all corners of the planet to slip into the water with these animals on purpose. Ebanks, with his machete, is responsible for flushing approximately $500,000 potential tourism dollars down the drain. (Global studies have estimated the monetary value to tourism of a live shark to be approximately $200,000 US- See Bahamas Diving Association. 2008. pg. 10., PEW 2010, Australian Institute of Marine Science) I wonder how the Cayman government and Ministry of Tourism feel about this?

I am not blaming Ebanks or Palfrey, because ignorance about sharks is rooted far deeper in society than this event. I understand that people have a fear of sharks, but why not educated yourself and try and gain a better understanding. You are using their terrain to launch your own personal stardom and recognition; what right do you have to eliminate them? It is a long road, but we need people in these competitions( not saying that every open ocean swimmer is anti shark) to appreciate the precious moment of glimpse they catch of these sharks rather than spawning a fear -induced massacre.
Maybe Penny and her crew need to go shark diving?

Does anyone know if they were eaten or simply wasted? Did he cut off the fins and sell them? Or sell the jaws as a trophy?

Click HERE to read more about the PEW assessment of live shark value.

Thank you Amanda Cotton for the amazing image.

"I have read as many posts as possible and have tried to gain understanding from both sides, even speaking with a close family friend who was a pro triathlete and now coaches open ocean swimmers. Her response was “Part of the challenge is conquering the elements, not killing off the obstacles.” I know you were not the one who slaughtered the sharks, but unfortunately you are the face associated with the crime. I encourage you to dive with sharks. Take the time to see them on their terms and better understand their place in the system. Without sharks there will be NO OCEANS for your children or grandchildren to swim across. Please know myself, and most others "liked" your page because we had to in order to comment, but there is nothing that I like about the event that occurred."
Posted by Shark-Girl at 10:58 AM