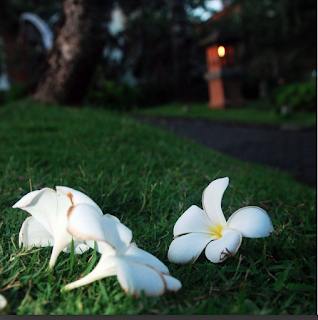 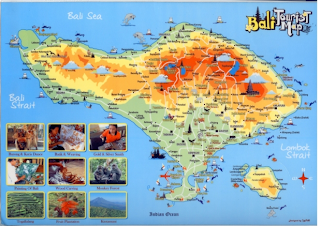 I fell in love with Bali for the first time in 2008. It was not like anyplace I had ever been with the smell of flowers and incense filling the air, the gorgeous people welcoming me with open hearts and the mind blowing underwater world. Duncan and I met later the same year and I spoke about Bali so much that it became an ongoing joke about me trying to get him there. I knew he was intrigued as to why it had affected me so strongly and knew it would only be a matter of time before I dragged him there. We began traveling to more exotic locations and experiencing new adventures, although still in my heart, Bali slipped from my mind. 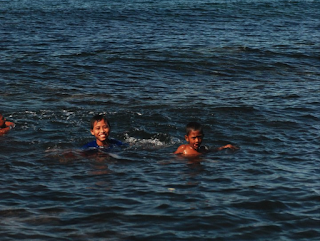 After the dramatic ending to our Whale Wars film shoot, we decided that a week somewhere to relax and actually process what we had been through was much needed. Amazing how you keep pushing forward and get the job done, without allowing yourself a moment to take in the emotions and the feelings of what you have experienced. We contemplated areas of Australia and realized that it would blow our budget very quickly. I love Australia, but it is very expensive to vacation there. I began to look at other options that were close by and would offer a cheap escape. Thailand, Indonesia and Fiji are all fairly close and easy to get to, but an add on the television for Bali caught my eye. The fire for Bali was reignited and I began furiously plotting and planning a trip. It worked out that 10 days in Bali, including round trip airfare and all meals, was cheaper than a week’s accommodation and meals in Australia. We were also approaching Duncan’s birthday and I wanted him to celebrate it on a beach somewhere, as last year he spent it on the boat in Antarctica.

Our first travel plan was rescheduled because we were asked to extend our shoot and take a detour to Albany, Western Australia. We wrapped our shoot and the plan was set. I hate all-inclusive packages and avoid them like the plague, but without a car and staying in a higher end, but remote (as I remembered) part of the island, we thought it might be the most cost effective option. I hesitantly pushed the “book” button and it disappeared into cyberspace. We made arrangements for our hotel shuttle and all that was left to do was pack. We left our massive cases loaded with winter weather gear and random items with our Aussie family. They had been wonderful and opened their home to us numerous times, because we keep coming back.

With a bag each, we returned the rental car to the airport and went to check in. The flight was scheduled to be 3 hours and 40 minutes, which in my world equals one trashy magazine and a nap. The guy at the exchange counter asked if we had US dollars for the visa. I had completely forgotten that they only accept US dollars for the $25 visa fee. Odd because the US dollar has tanked and they would be better off requesting a different currency. Anyway, we got the required money and made our way to the Virgin terminal. I have to say the Virgin (America, Atlantic or Australia) is the way to fly. The crew is always friendly, economy seats do not equal riding in a sardine can and there are free movies, great food and alcohol. 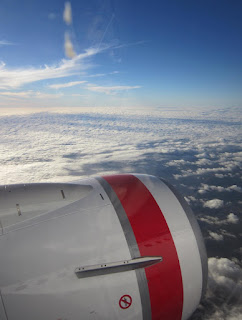 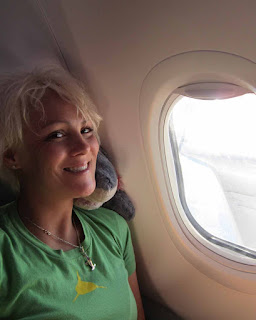 We arrived in darkness, which always adds an element of fear and excitement as the drive rips around corners. The arrival process in Bali is chaos, but nothing compared to the exit. (See the next bog) Indonesia offers visas on arrival for most western countries, so we were all set in that department. We paid our $25 and got inspected by customs before passing through. You hand off your standard arrival forms and then are ushered through to grab your luggage. I had not warned Duncan that there would be a sea of men waiting to wrestle bags off the belt and demand money for their safe return or to tote them to another location. As a man moved towards Duncan’s bag I found myself becoming that person in slow motion, moving towards Dunk and yelling, “doooooooonnnn’t leeeettttttttt hiiiiiimmmmm…touch the bag.” Duncan stood there, bag in hand giving me his,” Jill, what are spazzing about now,” look. I explained the situation and we gathered our bags and navigated the gauntlet out to the arrivals area. I scanned the crowd and saw the sign with Ms Morris on it and moved with authority towards our driver.

Our package at Club Bali Mirage included roundtrip airport transfers, so we jumped at the offer. We usually prefer to rent a car, but what I remembered of driving in Bali was absolutely terrifying. I say this having seen the 405 at rush hour and making regular appearances on I-95 in Miami. Duncan stared wide-eyed as we weaved in and out of traffic and zipped around corners. Our arrival was a blur and as we checked in at the open-air lobby, our fresh juice welcome cocktails were delivered. Apa Kabar was the only thing I really remembered and I did manage to wow our driver with language prowess, counting to 5 in Balinese. I asked how to say thank you and we were at least on our way. I find that knowing even a few words makes all the difference. It shows respect and an effort to really connect with the people of wherever you are traveling too. Don’t worry if you mispronounce, they will appreciate the gesture and most likely you will get a smile. 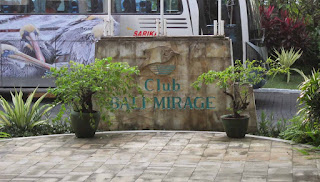 We were shown to our room, passing through the lounge area and making our way to the 3rd floor. Anxious to see our deluxe room, we fumbled with the card to open the door. Voila! Two single beds! What? 6 weeks in bunks and there was no way I was paying to sleep in a single bed. I explained to the concierge and he suggested that we move the beds together. I am not a travel diva, but I had a moment. Oh hell no, we are not paying for a room where we have to move the beds together. I marched downstairs and explained the situation. Unfortunately there were no deluxe rooms, so the slumber party idea was suggested again. Not happening. The man behind the desk twitched a bit before he offering us a Romance room. Excellent. We moved down the hall and walked in to find that “romance” means hanging a drapery around the bed from ceiling to floor. Exhausted we put our gear down with a sigh of success and exhaustion. Our new room looked like the pictures of the deluxe room that were shown on the website, so all had worked out. 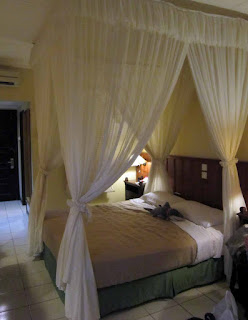 Our package included 24-hour meals, so we decided to check out the menu. We washed down mie goreng and nasi goreng with bottles of Bali Hai. We were the only people in the massive main dinning area and it was all a bit surreal. Both of these dishes are pretty standard in Bali with vegetables and meat mixed with noodles
(mie) or rice (nasi), served with a friend egg on top. Without meat, they are a delicious vegetarian option. With bellies full, we slipped into vacation mode and enjoyed another beer. We managed to stay up until midnight, well I should say, I managed, as Dunk is always a night owl. We toasted Duncan’s birthday before retiring to our room.

I was a little worried that Duncan would be disappointed if Bali was not everything I had described. I had made the vacation call and wanted him to fall in love like I did. I also wanted to make sure that his birthday was a blast. We had celebrated it early before we left for Australia, expecting to be somewhere bobbing around Antarctica. The circumstances had changed, so I wanted to make sure we were somewhere warm and that he had a really nice day. I booked him a Balinese massage and planned a dinner on the beach at Jimbaran Bay. I also looked into other activities to fill our vacation. We did not want to do too much, as the point was to relax and recharge, but I wanted to make sure he really got to see the culture. With this, I set out to book a road trip, diving and a trip to Kuta. 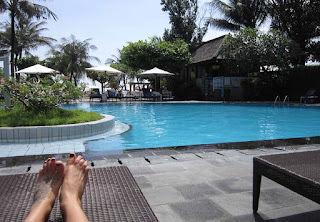