The Shark Free Marina Initiative not only encourages marinas to sign on, but also for tournaments to change their rules to catch and release. If people insist on catching sharks, at least the animal has a chance. This is still a grey area because they animals are heavily stressed when caught and often die despite being released. Property method needs to be put in place and fishermen need to make the effort in minimizing stress and increase efficiency for the release. Catch and release is not the ideal end point, but it is a giant step in the right direction.

When I read that the Key West Fishing Tournament had made the ground breaking move to no longer accept shark weights towards winning counts I was thrilled. Key West is a Mecca for game fishing, so this was a risky and powerful move on the director’s behalf. I was also excited because if such a well-known and respected tournament makes the change, they will stand as a solid example for other tournaments in Florida and across the United States. This is an all ages tournament as well, so it stands to set an example for younger generations.

It was brought to my attention that within the official rules, “Sharks may be shot while the leader is being handled by a crew member.” This is an obvious conflict of the announcement to make the tournament shark free. I scanned the website and found a contact to ask about the rule. I have dealt with people that organize tournaments in the past and have received very defensive responses and anticipated a less than polite reply. Most often too stubborn to listen to any reason on why their actions might be worth rethinking. 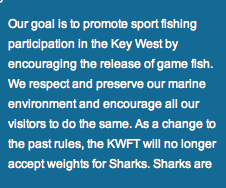 Not only was the response I received polite, but Rob, the director, seemed to be thankful that such a mistake in the edit of the website had been found. We exchanged a few emails and I have even more of a respect for his movement to make change. Often times it is not the locals, but the tourists that put pressure on Florida fishermen. Pressure to find the fish and pressure to kill. At the end of the day the tourists leave and the locals are left with a sea that has been raped. They don’t care that all the sharks they take are having a massive impact on the local and global environment. They just want their trophy to brag about back home.

Below is the email I received from Rob and I do hope to continue working with him. He is one person, just like the rest of us, who spoke up and wants better for the oceans. We all have a voice and it might be tough sometimes, but change is never easy. What is happening in your backyard? What d you want to change.

Thank you Rob and thank you Jason for finding the error in the rules!

My thanks to you for catching that line in the rules. Granted it would have been offset by the line item that we don’t accept dead sharks as an entry, but still, I’d rather have all references to killing sharks removed from any/all of our materials. Hopefully we can set the example for other tournaments as well.

Here in the Keys, shark fishing has always been popular with people visiting the islands from the mainland due to the “hype” of the “man-eater” status sharks have been tagged with. I personally won’t take charters out for “shark trips”. I realize that is a personal decision made by me that sometimes does come with financial risks, but so be it. I am now involved in a personal campaign to educate the Charter community on the fact that if the person wants to have a mount made of a shark (or other species), there is no reason to kill the fish. I still see sharks being brought back to the dock in what I know is an effort to “pressure” the clients into buying the mount.

It will most likely be an uphill battle, but the more the word gets spread around to the anglers, the more pressure will be placed on the boats to release the fish. If you happen to see anything else on our site like the item you found, please don’t hesitate to contact me. Also, if you know of a way that I can help the effort to promote releasing sharks, I’d love to hear it.