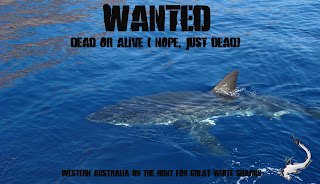 I have quite a few friends that work in Western Australian media and have received emails regarding the recent shark events that have been happening. I respect greatly their want of a different perspective, other than the hunt down and kill all white pointers methodology that rears its ugly head. As representatives of the media it is their job to cover the news, but they want to understand what is happening and why, as to not get caught up in the monster mayhem.

My first response is that yes, there are sharks in the oceans. There are lots of sharks in oceans all over the world. The human race is doing an outstanding job at reducing their numbers drastically, but they are still there. Each day millions of people venture into the ocean for a swim, dive, surf and each day millions of people have no issues with sharks. Most do not even realize that there are sharks in their vicinity and I am doubtful that many even think about sharks.

Sharks are curious and when there is a foreign object introduced into their environment it is worth further exploration for the possibility of it being a prey item. If humans had to hunt and work hard for every meal, we too would be more observant of our surroundings and the happenings in them. When I speak to school groups and the question about shark attacks comes up I ask the kids this: if a new student walked into the cafeteria would you turn and look? Would you wonder who they were and what they were doing? I can ask adults a similar question: if you are sitting at your local watering hole and new face appears doesn’t everyone pause for a moment and assess them? It is a natural reaction among most animals, humans included, to respond to a new stimulus introduced in your environment. We do this all the time, but if a wild animal does it than they must be man-eating monsters with the sole mission of wiping out the human race. Way too many horror movies!

I am not claiming to be an expert on Australian sharks or sharks in general, but I do know a thing or two about shark behavior and migratory movement. Great whites, “white pointers,” are a highly migratory species of shark traveling thousands of miles each year. They travel for mating purposes and following optimum food sources. The white sharks return to Isla Guadalupe and the Farallon Islands from August to December to feed on juvenile and inexperienced elephant seals. If you had to hunt for every meal rather than ordering off a menu or walking to the fridge, wouldn’t you would follow the food too? This is not rocket science, but really common sense.

The human race slaughters a mere 100 million sharks a year and not to belittle the tragedy of human deaths that have occurred, but the numbers are not even comparable. If sharks wanted to consume humans as a food source then attacks would not be bite and runs, but instead be feeding events. Globally thousands of people would fall prey to these animals, if this were the reality. We are not on their menu. As food fish move towards shore sharks will follow them. We see the great migration of sharks each early spring in South Florida as the move along the eastern coast following shoals of fish. This is a logical explanation for their aggregation and a pretty remarkable sight to witness. If you chose to swim or surf in schools of baitfish then there might be issues. Would you take a stroll through a group of isolated juvenile zebras or antelopes on the Serengeti? No, that would be crazy right? Think about it? If you put yourself in the area of a massive apex predator that is looking for its next meal then you might find yourself as an item of interest. I grew up in Maine and people always go to the dump to see the black bears. People take donuts and other goodies and dangle them out of the car window for pictures. When the bear attacks, the people are considered idiots. A person swimming through schooling baitfish or water where fishermen are dumping scraps gets attacked and it is the shark’s fault? Really?

I have been in a shark cage in less than clear water and have looked up at a, “ seal” made out of carpet. It definitely looks like a seal, but I know it is not. A shark cruising in the area will no doubt come check it out on the off chance that it is a meal. Great whites do not have hands like we do and the element of surprise is important when trying to reduce the likelihood of a fight or the prey escaping. They move in hard and will use their mouths to determine whether the item is food or not. This is unfortunately a bite first and ask questions later situation. In most cases they let go, but human flesh is delicate in the jaws of a massive animal and severe damage is most usually the end result.

Because the attacks seem to be happening with more frequency people are assuming that there are more sharks and acting as thought this is a terrible revelation. According to the Australian Shark Attack File there have been 2 shark related fatalities in 2012 and there were only four in 2011. The news would make it seem as though hundreds of people were being decimated at the hands of a rogue man hunting white pointer. We should all be thrilled that there are more sharks, but in reality this is not likely the case. We are removing their food source at a devastating rate with commercial fishing and the slaughter of seals and sea lions in parts of the world. These animals are working hard to survive and may be taking greater risks at feeding opportunities. Moving close into shore with people, boats and pollution is a great risk for their animals, but it must be deemed worthwhile in an attempt to find nourishment. There are also more people going into the ocean as the human population continues to explode. These explanations are logical, but not nearly as exciting as sending people on shark killing missions of revenge. As I write this, the Western Australia government has issued a shark hunt to kill after the most recent incident. The mindless slaughter of a CITES protected animal is certainly not the answer.

The thought of removing great whites from the protected species list in Australian waters is absurd. Western Australia Fisheries Minister, Norman Moore has stated that he agrees to the removal if the government consents. These animals are in a desperate race against time and we are already doing a fantastic job at killing them off, why on earth would we make it even easier to continue the exploitation of these ocean guardians? Enjoy a big fish dinner? Without sharks you won’t enjoy much of anything from the sea? We need sharks. Our oceans need sharks. Australia’s waters are dangerous, for sharks that is.