What do you do when a hurricane knocks the power out for a while? Obviously you climb the highest point you can find and get blasted with sand, wind and water. We made our ascent up Mt. Bimini, a 131 ft high pile of sand that has been dredged from the channel, and triumphantly stood at the top. I know the height because our sense of adventure attracted a passerby with an iphone that had an app for that. Our group of thrill seekers (boredom makes you do crazy things) included Duncan and I, our German producer friend that got stranded on the island and Grant, a former Sharklab manager. I highly recommend eye protection if you attempt this. As I write this there is no doubt still sand stuck under my eyelids and in every orifice on my body. I could have erected a sand castle with the amount of sand that I washed out of my hair and ears alone. 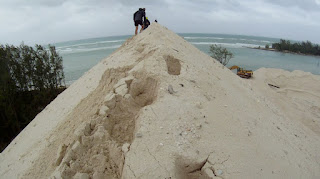 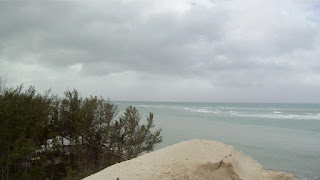 We arrived at the top with wobbly legs and an exhilarating sense of accomplishment; a similar feeling I am sure to those that summit Kilimanjaro or Everest. Ha! We had 4 cameras and did our best to capture the moment as well as each other falling down and getting pelted with sand. The view was beautiful and we will definitely make the climb in better weather. Video will be posted soon. 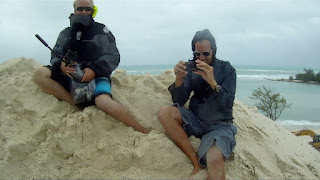 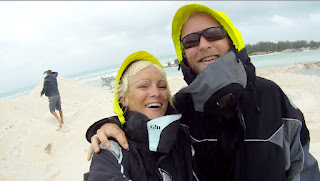 For two days we watched as boats moved into the marina at the Bimini Sands, a great hurricane hole. We gathered water, food and candles in preparation for the expected power outage. We made a quick cross to the north island on Thursday for supplies before the ferry stopped running. Supplies included beer and wine. UI laughed when my dad said, “ don’t you get all your supplies and once you are ready start drinking?” Yes, there is some drinking involved. Activities are limited and the bar is a great place to gather and get the latest gossip, plus they have a generator. We had a producer friend on island and his flight was cancelled because the airport on Bimini, like most in the Bahamas was shut down. Duncan and I have been through a few hurricanes, but this was our friend’s first and our first as a couple. How romantic?

We geared up and ventured out a few times to check out the island. A lot of people were out doing the same thing and the bar was quite busy as we waited for Sandy to give us her best shot. Sideways rain and splattering clay made the ride home quite an adventure. Gusts of wind nearly stopped our trusty golf cart in her tracks. I do love having all the doors and windows open though, not having to use the air conditioner. We broke out the cameras to film and snap pictures of the waves crashing against various areas on the island. Spray flew in the air as 10 to 15 foot swells charged the shore. 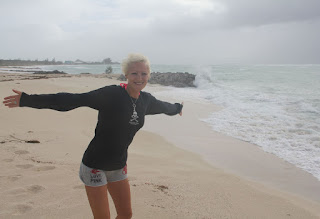 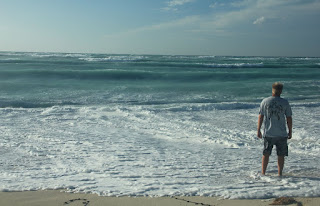 Sandy strengthened from a tropical storm to a category 2 hurricane and then dropped again before hitting our little island home with gusts up to 65mph as a category 1. Coconuts flew, palm fronds were shredded and Australian pines disintegrated. Many a lawn chair and gutter met their demise. The power went off for a bit on Saturday, but we managed to hold onto for most of the day. It finally went off on Sunday, but was only out for 13 hours. The wind was still relentless after the heart of the storm had passed and switched directions. The sheltered side of the island is still getting pounded. The channel markers that sit almost a mile off shore are now rapidly approaching the beach about a half- mile south of their designated location. Mother nature is raw and wild. Amazing to witness when you are safe and have shelter. 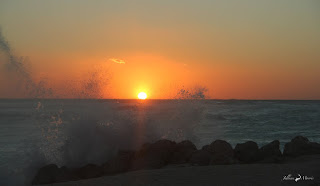 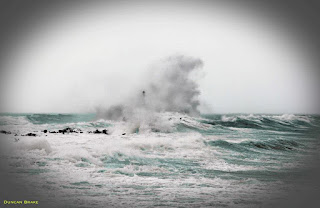 When the power finally gave way for the day and seemed like it might be out for a while we broke out the gas camping stove and candles for a romantic dinner. Our producer had made a flight off island and the winds had receded a bit, but the power was shut down to do repairs. I cooked a lovely couscous with veggies and tomato sauce. It was certainly nothing gourmet, but fairly impressive considering the situation.
The world is getting back to normal as Bimini relaxes on a Sunday and Sandy moves towards the Eastern United States coastline. She has been dubbed, “Frankenstorm,” due to her expected Halloween arrival. Hurricanes are no joke, but I am glad we know we can deal with them on our little island. People came together to check on boats, houses and make sure everyone was okay. It is scary, but also exciting to watch the power of the ocean. 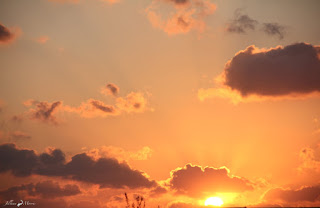