Everything we do in life has its positives and negatives; shark conservation is certainly no exception to this. Each week strides are made and then there are usually massive set backs. It would be easy to throw your hands up in defeat as it can be very overwhelming.

Early last week I received an email with a video link sharing some ego driven fisherman catching a bull shark on the dock in Bimini. The worst part was that not only were they fishing in a Shark Free Marina that bans fishing from the dock, but they highlighted the fact that they were breaking the rules with absolute disregard. The email explosion started and spread across social media outlets.The initial email responses were respectful and the host even asked if I wanted to appear on his show to talk about Shark Free Marinas and the work that is being done to protect these animals in Bimini. I was impressed with his openness to hear the other side of the story. A lot of time the responses are defensive and belligerent. When my mother drafted an email her response was a bit more entitled and I could tell that he was probably getting swamped with emails and calls and getting annoyed.

This one was extremely frustrating because I am on the board for Shark Free Marinas and it is something I am extremely passionate about as well as this being in my back yard. Bimini is home and these sharks deserve every bit of energy we can offer to protect them. It was amazing to see the manager of the marina, the Sharklab, former Sharklab staff and current members of Bimini Tourism board push hard to defend the sharks of Bimini. This isn’t just about sharks, but also about respecting rules that are put in place to benefit not only the oceans, but the community.

The next day I was scheduled to do a shark presentation for two groups of second graders at a local school. I gathered my frustration and turned it into enthusiasm for the time with the kids. I love this age and was excited to spend time with them. I went through the basics of what a shark is and what sharks do. We also talked about what they could do, even though they are young, to help sharks. They were all so excited, sharing stories and wanting to know more about different types of sharks. I love it. I love the energy and the hope that resonates within children. I left the school feeling recharged and ready to tackle the next shark obstacle.


I arrived home and checked my email only to find that within 24 hours, the owner of the video agreed to remove it from the internet. Again, we all have a voice and sometimes it is just a matter of speaking up. At this point, charged with energy from the kids, I felt like I could conquer the world and set to working on more projects and presentations. Every time there is a set back I try to think of the kids. There really is hope and we must keep that in mind. Fighting for something we care about and believe in is never easy, but it is worth every bit of the battle. 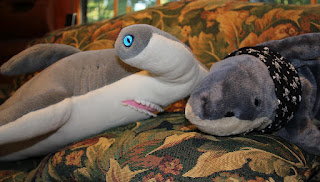 Monty and Lucky ready for their school visit!