Duncan and I had been thinking about getting a dog for a while, but with our travel schedule we were concerned. Things worked out that we would be spending most of December through March in Bimini and we decided that if we found a puppy this would be the perfect time. We are very lucky because the Sharklab has dogs and our friends Katie and Grant also have a dog and all are happy to puppy sit.

We met Lusca on the north island, caged up with another pit bull. Sadly pits are bred for fighting in the Bahamas and even those that do not fight are often mistreated. We both melted when we saw her and convinced the owner that we would take her. We agreed to come back to the next day and get her. It was a frantic dash to get the house ready. Duncan was heading to the US, so he would be getting much needed supplies. You cannot even buy a dog collar in Bimini, let alone supplies.

The next morning we arrived to take our new baby home. She was shaky, but her first golf cart ride went well. She then had to take her first trip on the water taxi in order to get back to the south island. We then hitched a ride back to our house. We placed a blanket in the corner and she settled in, watching us a bit wide eyed. We loved the name Lusca, so it was an easy decision that she would be our little sea monster. Lusca is a Lucayan word that describes a half shark half octopus of legend that lives in the bottom of the blue holes in the Bahamas. She was covered in fleas, ticks and has an umbilical hernia. There is no vet on the island, so we quickly reached out to a vet that visits to find out if we should be concerned. Apparently it happens a lot with puppies and will go away when she is spayed. Duncan, sadly, had to leave and it was Lusca and I for two days. 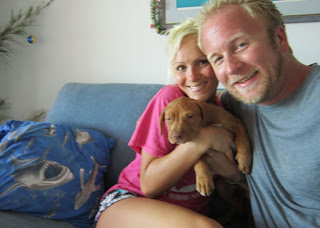 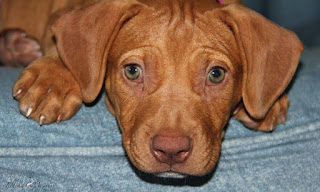 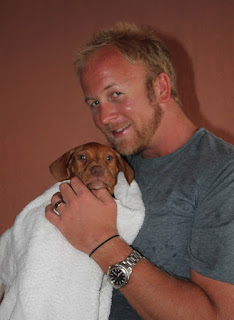 She napped a bit, ate a little and then the house was hers. Her first leash and collar was a bandana and rope. I pulled tics off and gave her a mini bath. We spent two days running on the beach, walking and playing. Each night she curled up with me on the couch and was very snuggly. She is mostly pit, as far as we know and our friends that have a pit say they never tell you that they are very snuggly. She has the sweetest little face filled with wrinkles I hope she keeps as she grows. 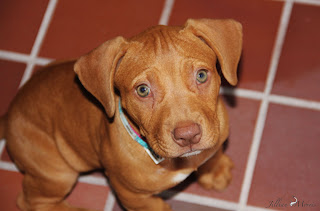 Duncan arrived back with more puppy stuff than I knew what to do with. She was properly getting spoiled. He and our friend Liam had gone crazy in Pet Co. and Lusca received a new fancy collar, leash, bed, toys, dishes, food and treats. She even got Christmas presents from our friends. She is really settling into her new home. 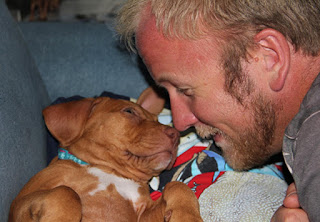 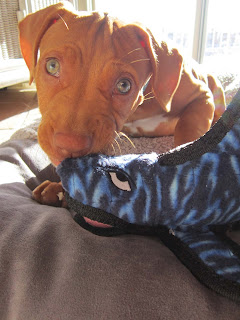 On Christmas day we headed to Honeymoon Harbor to spend the day with our friends and play with the stingrays. Lusca sat at the front of the boat, ears sailing in the wind and then napped like a champion. She loved the beach and had a long nap in the sun. We made her pose for some pictures and she had the same protest that many kids probably have when mom and dad are being obnoxious with the camera. On the ride back Katie bundled her up in a towel and blanket and she slept the whole way; our little boat dog. 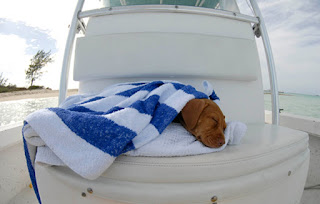 It has been two weeks and she has already grown a ton. She has had her puppy shots and the fleas and ticks are gone. Training is going well, but she is definitely a lot of work. It has gotten us out to the beach a lot, which is nice. She goes everywhere with us and is such a love. So happy we were able to give this dog a home.
The stray dogs of the Bahamas are called “Potcakes,” named for the congealed rice and pea mixture that people in the Bahamas and Turks and Caicos feed dogs. They are what we would call a, “mutt,” and they really make amazing pets. They may require some medical care or a bit more attention, but they loyal and loving animals. If you are interested in adopting a dog from Bimini check out Stray Dogs of Bimini. 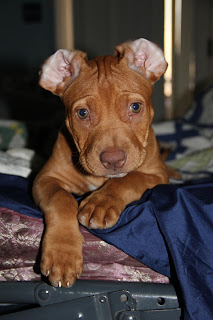