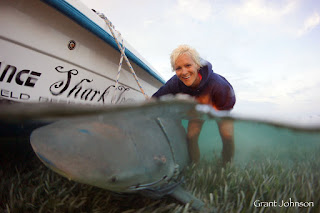 I love bull sharks. They are big, powerful and have a lot of attitude. They are also graceful, misunderstood and remarkable in the fact that they can travel through brackish and fresh water. Bulls are one of the many species that frequent the waters around Bimini and today we went in search of them. 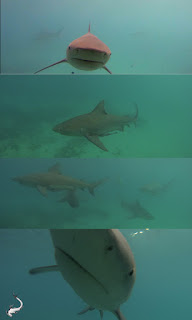 The team included Lauran from the Sharklab, her family and Katie and Grant who now run the activities department at the Bimini Sands. We headed to the north island to bait off the docks in hopes of getting the chance to tag a big animal. It wasn’t long before two very large sharks began appearing in and out of the shadows. Massive tarpon and couple stingrays showed up as well. Eagles rays jumped in the channel and the energy was building. None of us were very patient, especially when the sharks are in the area. I decided to run to the bathroom, saying we would probably hook a shark while I was gone. As I was walking back down the dock with Katie, people were shouting and we ran to jump in the boat.

The sun was starting to drop in the sky and the clouds were really moody. It was like a scene from a movie as we brought the shark along side the boat with the sun beginning to drop behind moody late afternoon clouds. A seaplane took off and boats were zipping around. We made our way to shallow water and quickly began the workup. We did the standard three length measurements; took a DNA sample and I got to put the Casey tag in her. The total length of our big lady was 2.46m (8 ft) She had a ling running from her mouth a few cuts, no doubt the work of a fishing venture. 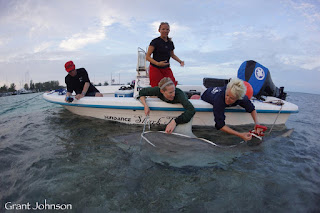 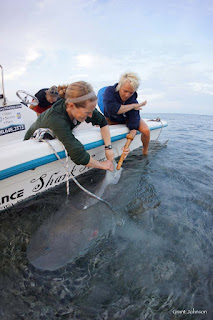 Our friends Dony and Michelle arrived from Toronto and Duncan got them over to us in time for them to snap a picture. I think they were a little shell shocked having landed and less than an hour later they were standing in shallow water touching a massive bull shark. So amazing! Unbelievable that our best friends arrive on island and this is how we welcome them! 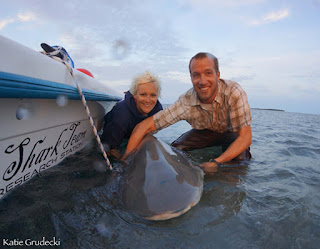 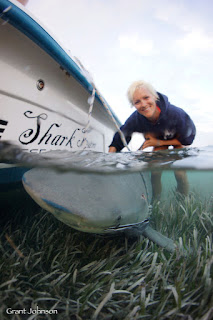 As the sun painted the sky a beautiful orange we snapped some photos before watching her swim away with power and grace. Everyone was so excited. What a rush. My face hurt from smiling so much. I had wanted to give a bull shark a hug for a while and this was a pretty epic way to end 2012! Not only that, my friends arrived in time to see their first bull shark up close. I am still spinning from the whole experience. 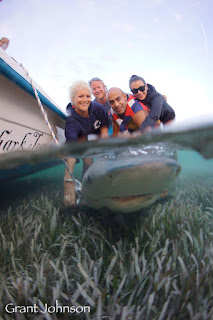