Duncan and I spent an amazing day on the water to celebrate our one year wedding anniversary and decided to head to the north island for dinner. We sat on the Big Game restaurant deck and enjoyed our cocktails as we watched the sun slipping away. The fish-cleaning tables were bustling with activity as several guys cleaned the day’s Mahi Mahi catch. We watched as they leaned over the railings and pointed, no doubt spotting some of the bull sharks that cruise the area looking for free scraps. For decades bulls sharks have swam into the channel between the islands and gotten a free meal from fisherman cleaning their catch. The Sharklab has been collecting valuable data from these animals for years through their tagging program. 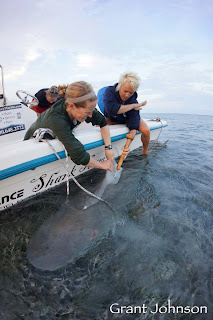 
This year Big Game launched an operation allowing people to see these incredible animals up close from the comfort of a shark cage. No, it is not conditioning the sharks to associate people with food, it is simply allowing people a safe viewing window of a phenomenon that has been happening for year. We watched as one guy grabbed a rod and his fighting belt. I looked at Duncan and we knew what this idiot was planning. The deep-sea rod with high-test tackle was not designed for catching snapper, but was ideal for sharks. All of a sudden everyone was shouting and running down the dock. He had hooked a shark and was now trying to figure out what to do. Guys were scrambling to grab cameras in order to capture their latest Facebook status update in an attempt to prove how tough or manly they are.

I headed for the dock and Duncan headed for the office. The guy was shouting, “it’s in the pilings,” as I made my way over. I quietly asked one of the guys what was going on and he smiled as he shared with me the excitement of the bull shark on the line. I could see the shark in the distance and walked back to the office. I had to bite my tongue because in their drunken state of machismo, these men would most definitely be argumentative and this accomplishes nothing.

Duncan was explaining the situation to the security guard as I entered the office. We made our way back to the deck and watched as she went to speak with the men. The shark had by this time broken the line and was now, most likely, sporting some new and unnecessary jewelry. You may be wondering why I am writing about this and there are 3 simple reasons.

1. This marina is clearly labeled as Shark Free with signs posted in several locations.

2. The Bahamas is a Shark sanctuary and fishing for sharks is illegal. There is a sign posted on the fish-cleaning table that clearly states this.

3. Fishing for sharks at a shark research & diving site is pathetic and completely disrespectful to the animals, the research and the island itself.

Here is what Bimini Bull Run had to say in response to our report.
“We just got word that someone deliberately hooked one of the wonderful sharks at Bimini Big Game Club yesterday. The shark broke the line but still has a hook in it, which is TOTALLY unacceptable.

These persons willfully chose to ignore:

6. An informational website that clearly states no fishing (SFMI)

We will be taking further steps to prevent ANYONE from fishing sharks at the BBGC. At the time security was called by the locals who witnessed the event (thank you!) and the shark fishing ended.

Due to the newly installed fencing at BBR it has made shark fishing much harder (you really have to try) but yesterdays sad event showed us that there is more educational work to be done and more outreach that could happen.

Change will happen but sometimes people who feel entitled will ignore every sign posted and only stop poor behavior when confronted." 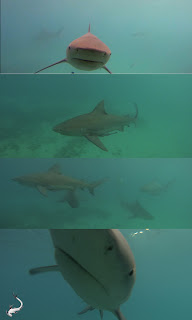 The vessel these men were on has been banned from Bimini Big Game Club! Bimini LOVES Sharks