Sharing Sharks with Family and Friends

Duncan and I spend a lot of our time with sharks and we wanted to share our love for these animals with our friends and family that were traveling to Bimini. Along with a shark themed wedding, we planned several shark related activities to get everyone involved. This proved to be the opportune time to break them into our sharky world. A few were quite keen to dive in while others took a little persuading. Many of our friends and bridal party are fellow shark nerds, so they helped coerce those that were reluctant.

My parents have dived at Tiger Beach and Dunk’s parents have spent time at the lab, so we wanted to do something really unique. We packed up the gear and made sure we had a loaf of Bimini Bread and some peanut butter; the meal of champion shark explorers. Funny how we take peanut and jelly for granted, probably because it is a staple in the diet of most American children. It proved to be a fun treat for Dunk’s family as we smeared peanut butter with a less than solidly constructed spoon. Duncan remembered the bread knife, but had put it in with the bait, thus rendering it useless. 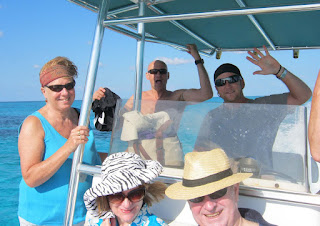 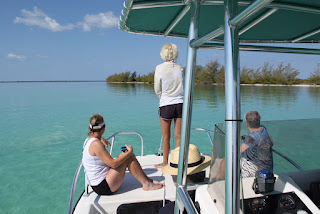 We headed south around the tip of the island and gave elaborate explanations of the local attractions. The concrete ship, a plane wreck and the animals we were expecting to see. As if on cue, 4 eagle rays cruised across the flats like stealth bombers on a covert mission. They move with such grace and ease, a quick flick of their wings and they are moving as fast as the boat. The water was like glass creating the illusion that the eagle rays were suspended in air and truly flying. 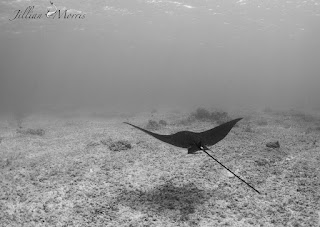 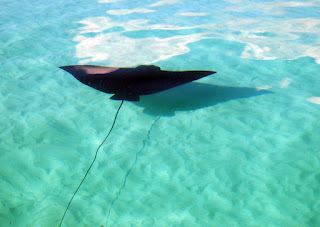 The turtles were next to put on an acrobatic performance, zipping and zooming in front of the boat. Little green turtles are insanely fast and these guys put on quite a show. Everyone was standing up and pointing them out. As we made our way into the mangroves we found a place to anchor the boat. Duncan waded ahead with my parents as I corralled the Scottish contingent. Wading through squishy mangroves is an odd feeling. You are never sure of how deep your foot will actually sink as the silt consumes your toes. We marched inward to our destination and our guests were a bit shocked when they entered the mangrove tunnel. We all had a good laugh as the water got deeper and people found themselves forced to swim. 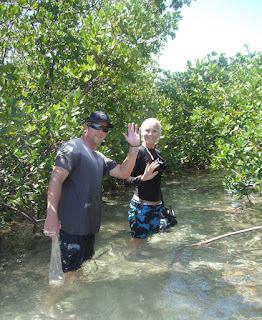 When we broke through the end of the tunnel Duncan was waiting with my parents and at least 1 juvenile lemon shark. With a little bait in the water, the sharks swam in to check us out. The snapper put up a fight though and you can actually watch their bellies swell from gorging on the free treats. The snapper are not afraid of the sharks and will fight for a savory morsel. The sharks approach with caution and take a bit of time to work up the courage to move in for a feed. It is amazing to watch the behavior and see how they are working to assess the situation. One larger shark came in and took a piece of fish. It is likely he has been apart of a similar feed and knows the score. The parents, aunts and uncles were all in awe. Unbelievable to see their eyes light up and the excitement they were expressing. Cameras were flashing and there was a surreal sense of connectedness to family and nature. Our parents do not know each other and I had just met Duncan’s uncle the day before; forever this day will be a bond that we all share. It was the best gift that we could give people, but turned out to be a gift for us. Seeing our parents laughing and loving every minute is not something you could ever pay for. These are moments that define what it is to truly live. I looked over at Dunk and smiled. We were both over the moon happy and were just trying to take it all in. 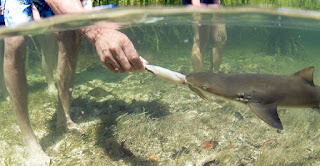 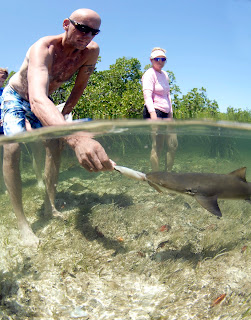 We coaxed each person up to hand feed a baby lemon. People were obviously a bit nervous, as hand-feeding sharks is not something they do everyday, well not most people. It is also something that has to be done with extreme caution and respect for the animals. Duncan guided each person as they held the piece of bait out, excited like kids on Christmas morning. The peanut gallery offered a running commentary of sharks coming in and out and what they were thinking; hilarious interpretations from our mothers. Love those women. I snapped photographs and got lost in the moment.
As each person took a second turn. They were more comfortable and probably saw the feed happen rather than the blur during their initial attempt. There are few moments in life where you can have an interaction with a wild animal where there is a connection. I feel blessed with the fortune of having these moments on a regular basis. Sharks get a bad rap and seeing someone squeal with delight because they have had a moment with a baby shark, is one of the most rewarding experiences. I think Duncan and I were actually more excited for our parents than they were. It is such a rush knowing that you are giving the most important people in your life a once in a lifetime experience. 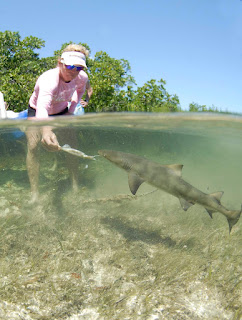 Watching the little lemon sharks is something I could do for hours and hours. Duncan and I even took a turn feeding the little guys when the family had finished. I always smile and giggle because it really makes my heart happy. These little guys are one of nature’s perfect creations and we were fortunate enough to spend a morning with them. Life is good. When life gives you lemons, feed them and show people how awesome sharks are.

Everyone was buzzing as we motored away from the mangroves. A picnic on a private beach let everyone bask in the glow of the shark encounter. We enjoyed the gourmet peanut butter and jelly sandwiches that we crafted with love and a minimal amount of sand. We spent the afternoon snorkeling before returning the troops to port. I still cannot find the words to describe the rush of happiness that everyone seemed to be overwhelmed with. Who would have thought that a few baby shark s are all it takes to create a lifelong memory?

On our next adventure we took most of the guests to Honeymoon Harbor, an iconic must visit spot when in Bimini. Stingrays come into the shallow bay to feed and the private island is great for exploring. The water was a little deep, but everyone made the best of the stingray encounter. We had some special guests when 2 black tip reef sharks made an appearance. My dad was snorkeling further off shore when one buzzed by him. They came in quick and began weaving in and around people. People were laughing, pointing at the sharks and doing their best to keep their faces in the water to see them. It was great to have sharks in a wild setting with people snorkeling. They could see that the sharks were curious, but that they had no interest in being aggressive towards anyone. Peter, our Sea Shepherd friend that prefers cold climates and staying on the boat, had an ear-to-ear grin as he watched the little shark. Dunk and I threw bait at each other and once again were overwhelmed with how awesome the experience was. I looked around to see the most important people in my life laughing, swimming and excited about sharks. It doesn’t get much better than that. Really a blessing and a bit of Bimini smiling on us!

That moment when someone loses their inhibitions and just feels is an incredible thing to witness. We watched as one by one our family and friends let go and just follow the ocean. We are all wound up so tight and we have these ideas in our minds that can cause us to miss out on really living. Every person on the boat that day was really living. They were feeling it, breathing it in and laughing with a whole heartedness that gives you a natural high. My face hurts from smiling as I am writing this and reminiscing.

Although we were busy with wedding prep and the actual wedding, we wanted to make sure people were able to get a Sharklab tour. Tristan, the director, offered his time to take our friends and family around and give them the chance to hold a baby shark. Dunk and I spent the Sunday after the wedding giving tours as well. Not a typical post-wedding activity, but we were thrilled to share the sharkies with a few of our more skeptical friends. Seeing the transition of fear to understanding, even mild affection is so powerful. We watched as our friends were fascinated by the miniature versions of powerful apex predators. Like a kitten or a puppy, well maybe not exactly, but baby sharks are cute and if you can generate that fondness in people you can break down preconceived ideas. You can build a respect for and even a love of these animals. 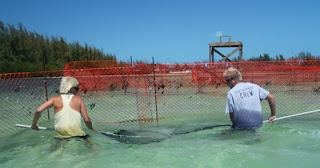 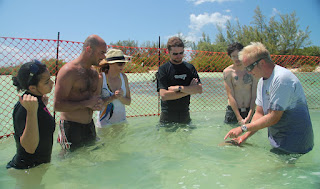 One of my bridesmaids was a little nervous to hold the little nurse shark, but she didn’t want to miss out on the opportunity. As Duncan handed the shark off to her she studied it closely and although still nervous, a massive smile covered her face. My aunt, who told me that she hated every shark, now, thinks they are cute and understands why they are important for the ocean. Although she did not hold a shark, we made progress. I am so proud of our family and friends that opened their minds and their hearts to learn about the animals that brought Duncan and I together.
We live a crazy and amazing life and sharing one little drop of it means the world to us. Seeing my cousin holding a nurse shark actually made me tear up a bit. She is one of my best friends and it was important for me to share that with her. I hope she realizes how much joy it brought me. 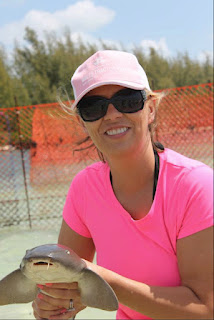 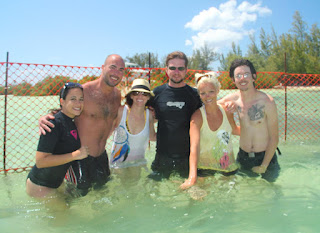 My hope is that not only did our wedding guests leave the island having falling in love with it, but I also hope that they will share their sharky adventures and each in their own way, be an advocate for these magnificent creatures. 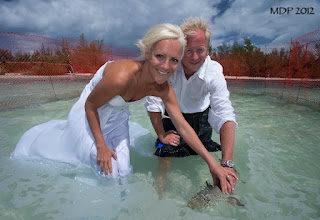