Duncan and I decided to make use of the glorious day and head to the lab to film baby nurse sharks. When we arrived at the lab there was frenzy of people and excited shouting. Before I could really process what was happening, we were in a skiff and zipping out the channel. We stopped the boat and looked at each other, not exactly sure where we were headed. A quick radio to the other boats and we were underway again. The reason for this frantic departure was that the Sharklab had caught and tagged a 4.1 m small tooth sawfish. This animal is endangered an extremely rare to see. In his 2.5 years at the lab, Duncan never saw one. We were like kids on Christmas morning as we raced across the flats.

When were filming at the Blue Hole in Long Island in 2010 a freediver spotted a sawfish in the Blue Hole. We arrived just after the encounter happened and immediately put our snorkel gear on. We spent a while in the hole hoping to get a glimpse, but were resigned to looking at pictures. It was really exciting and a little creepy for the diver, doing a breath hold with his eyes closes on the line, who first spotted the creature from the Blue Hole. I reported the time, location, and depth and sent a picture to the appropriate parties. Excited to contribute valuable data, but jealous of those had seen the elusive animal.

Some of the lab crew had spotted her while fishing for other sharks. Grant and Steve assisted in getting a tail rope on her so that she could be brought to the side of the bought and worked up. She was carefully measured, as working with the saw can be dangerous. These animals are incredibly strong and have a very sharp business end. DNA and blood samples were taken and she was tagged with an acoustic transmitter that can be actively tracked. 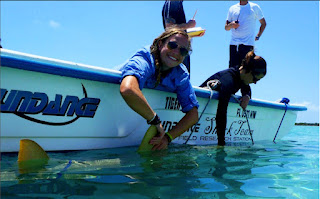 Sharklab Assistant Manager Lindsay Biermann holding the saw fish next to the boat.


We found the flotilla of boats and added our trusty steed. We had not planned on being in the water, so did not have our mask or fins. This meant grabbing random fins and gear in an attempt to piece together a suitable kit for filming the awaiting critter. Duncan managed to score a proper pair of freediving fins, where I was left with a set of “my first fins,” that proved to be as effective as bedroom slippers on my feet. I slipped into the water and followed the line that was connected to the sawfish.

She appeared in the distance and I gasped and giggled in my snorkel. She was massive. In my head I knew that 4.1 meter was big, but it seems as though a sawfish carries itself with a larger than life presence. Maybe it is the massive serrated “saw” at the front. She was lying on the bottom, but keeping a watchful eye on the action. She got agitated and stirred up a massive cloud of dust. Filming was tricky because you do not want to stress the animal. I floated there in complete awe of this prehistoric looking creature just a few feet away. I equate this experience to seeing a giant panda in the wild, although I prefer my encounters in the water. 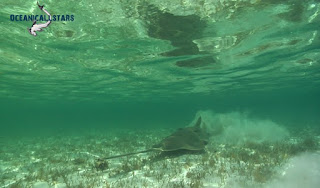 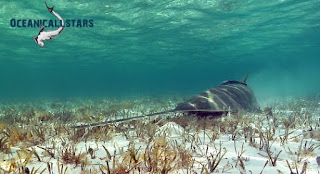 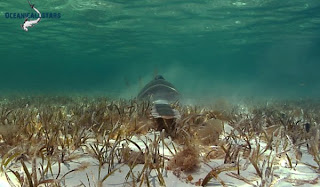 Sawfish are a type of ray that inhabits coastal waters. Very little is known about these animals and they are listed as critically endangered on the ICUN Red List. Trophy fishermen have valued their saw and for hundreds of years these animals have been targeted. They have also suffered because of coastal habitat loss. This is seen even in Bimini where a major resort has filled in a large section of mangrove. The Sharklab team was able to track her for 8.5 hours. They lost her in the middle of the night in shallow water that the boats could not get through. They are still actively searching for her in hopes of being able to put a satellite tag on her. This would provide invaluable information about this animal.

Seeing an animal like this sends a flow of energy and excitement through everyone involved. It is moments like these that remind us why we all fight so hard to help the oceans. I want my children to see a sawfish, not just tell the story about an animal that once lived around Bimini.