In my life every week is Shark Week, but there are definitely weeks more intense than others. A recent visit from photographer, painter, tattoo artist and good friend Deano Cook was one of those weeks. I met Deano in 2007 when I saw him tattooing marine artist Wyland at a convention. As a lover of sharks and tattoos, I knew right then and there I had to have a piece of his art on my body. It took six years of busy dive schedules and missed attempts, but we finally made it happen when he came to visit us in Bimini.

Bimini is one of my favorite places on the planet and I absolutely love sharing my home with people, especially those that have a real passion for the ocean. We wasted no time getting in the water and headed out for a Caribbean reef shark dive. The site here is pretty shallow, which is nice change from most of the deeper shark dive sites throughout the Bahamas. We had about eight reef sharks cruise through and two little blacknose sharks. They are considerably smaller than the reefs, but have no problem getting right in the mix. We spent an hour with these beauties before heading due south in search of stingrays. 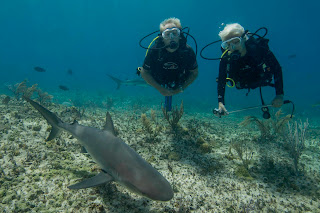 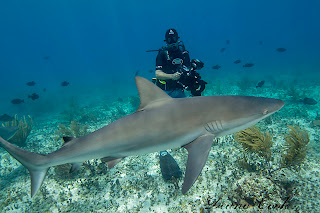 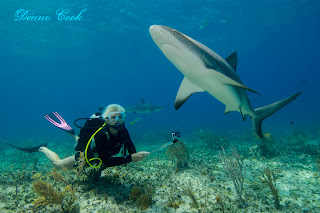 Honeymoon Harbour is Bimini’s smaller and less commercialized version of Grand Cayman’s Stingray City. We anchored just off shore and it was only a matter of minutes before the troops came flying in. For years, visitors have interacted with a large population of Southern stingrays and the occasional lemon, blacktip or nurse shark at this location and it is a favorite spot for most visitors. On our last few visits a very precocious nurse shark has made an appearance and seems to have no problem begging for a snack amongst the rays. Animals are really clever and I love seeing large species interact with each other. I know nurse sharks do not garner a lot of excitement from diehard shark enthusiasts, but I love them. 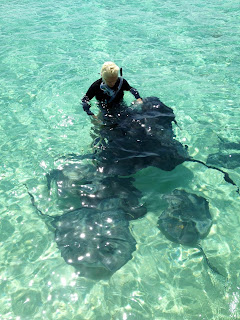 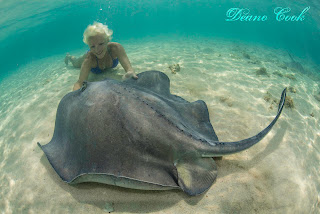 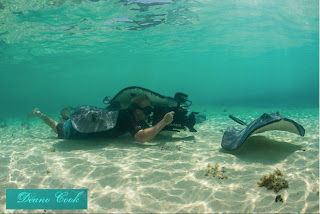 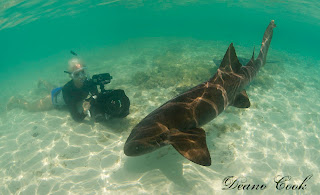 Another regular, a ray we affectionately call, “ The Blanket,” showed up to welcome Deano to the island. This female Southern stingray is probably five feet across and has no etiquette when it comes to interacting with people. She is large and in charge, sitting on your lap, knocking you over and completely smothering your camera. She is definitely the matriarch of the group and quite assertively lets everyone know this. We spend a lot of time with these animals and it is incredible to see their personalities become more defined the more time you share with them. Yes, they are all the same species, but they are definitely not cut from the same mold. I always get the giggles at this site because it is impossible to not laugh when a stingray is tickling your toes. 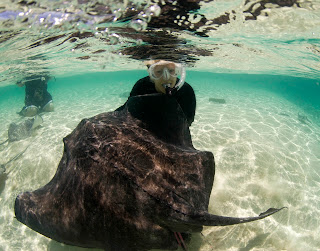 We returned to the reef sharks the following day and got some great shots with our new Oceanic and Lavacore gear. Our dive was cut short by some nasty squalls moving in. They come is fast and hard during the summer months in Bimini and can quickly knock the visibility to zero. They are so pronounced and confined however, you can usually avoid the brunt of them. We headed out and actually lost power in our port engine, which kicked us around hard on a large swell and sent Deano flying across the boat. We turned to head south towards the medical clinic on Cat Cay. What should have been a fifteen-minute ride, took over an hour with the wind and swells. We arrived and Deano was able to move around, but had definitely sustained an injury to the ribs. We made the slow cruise back to South Bimini and headed to the clinic because the doctor was not available on Cat Cay. The doctor told him he should get x-rayed in Nassau, but Deano was not going to miss out on diving, sharks and tattooing.

We took it easy the next day, but Deano did not want to miss out on opportunities, so we made it work and headed to the Sharklab. We spent time in the pens with some juvenile lemon and nurse sharks and Deano was able to get some images as well as hold a few of the little guys. It really is a special experience and I never get tired of hanging out with those cute little babies. Sharing miniature versions of the ocean’s might predators is a powerful tool for education. Deano is a shark lover, but for many people seeing how “cute” a shark can be really changes their perception about these animals. 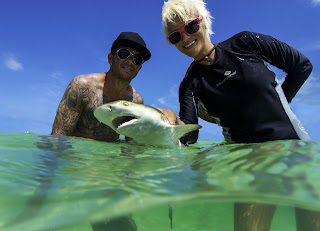 The mangroves were next on our list because they are the heart and soul of Bimini and a place everyone should take the time to visit. It may not seem exciting, but the amount of life above and below the surface is remarkable. We showed him the mega resort on the north island and explained the damage that has been done and the impending threats that are looming. Bimini is not a bustling metropolis, nor should it ever be, but the quiet of the mangroves really takes you away from the hustle and bustle of everyday life. I am not sure how excited Deano was about the mangroves to start, but within minutes he was raving about how incredible they were. 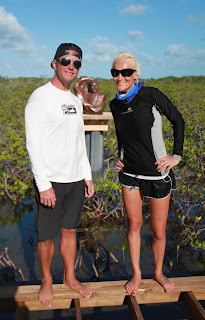 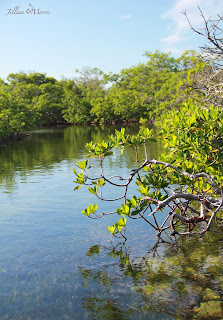 As if on cue, a juvenile lemon shark swam out in front of our boat and cruised through the gin clear water just ahead of us. We know the sharks use the mangroves as a nursery for the first 3-4 years of their life, but it is always exciting to spot one. It was really awesome to see how excited Deano got as well. A tree-lined channel is not where you expect to find baby sharks and these encounters are always surreal. We continued onward spotting schools of snapper, small conch and birds. We paused for pictures and to talk about this incredibly diverse forest and why it is vital for Bimini and the oceans of our planet. These nurseries are critical for healthy populations of not only sharks, but snapper, conch and lobster; all major components of the Bahamian economy.

We hopped in for a snorkel in Bonefish Hole and found schools of silversides dancing in the sunlight, giant stingrays buried in the sand along the edge of the mangroves, hundreds of snapper, tiny butterfly fish and sergeant majors peeking out from behind the roots and dozens of small lobster taking refuge under mangrove root ledges. This forest is literally overflowing with life. I watched a crab eating a snail, while delicately balanced on a single branch. The weather was rough at the edge of the channel, so we didn’t spot any turtles for Deano, who was desperately hoping to catch a glimpse of the juvenile greens that hang around, but regardless the day was amazing. 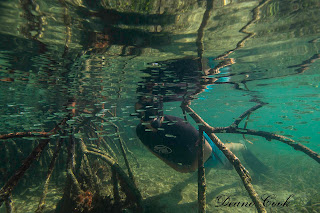 The week was going by way too fast, like it always does when you are doing what you love and it was time to get down to business. We had spent evenings deciding on the size and Deano enjoyed an ocean view office to do some stenciling. I will admit I was hesitant to have a large back piece, but I knew a lot of the detail would be lost if we went too small. Deano was patient as I taped on the images and then looked at pictures of them on my back. We finally compromised on a size and he laid the stencil on my back. Although he started with a stencil, the true artwork is in his eye as he free hands the shading and brings the animal to life. I did not want a shark tattoo, I wanted a portrait of the most amazing animal on the planet; Deano Cook made this a reality. He is not just a tattoo artist, but someone who has spent time with these animals getting to know how they move, how they act and the tiny intricacies that make them unique and beautiful. As we discussed the details to emphasize on the great hammerhead we were continuously on the same page. The eye, the curve of the tail and even a biopsy notch in the dorsal fin; he brought this magnificent creature to life. 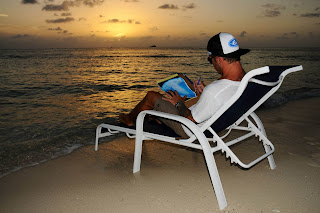 This marks my 7th tattoo, but it the first large piece of artwork I have ever had. As I sat on the stool in the make shift tattoo studio we created in our living room, I was excited and nervous. There is such a rush when you get inked. It hurts, yes it hurts a lot and people are full of crap if they say it doesn’t. Deano spent six hours the first day and then we enjoyed grilled conch prepared by my amazing husband. We talked about sharks, adventures and chasing our dreams. Deano and I had never dived together, so the days building up to the tattoo were really special and were definitely brought into the piece. Deano is a friend painting his love of sharks using my back as a canvas. I say, “using,” because we are not done.

We started earlier the next day because we had “Lobster Fest 2013,” to attend that evening and we didn’t want to miss out. Lobster season had opened the day before and our good friend and neighbor Leesa was preparing several dishes including HANDMADE lobster ravioli. Another 5 hours of pain, stories, art and ocean passion went into my back. We rocked out to a great band called Slightly Stupid and some Maroon 5. Lobster fest was beyond words and we all really enjoyed another random and epic night on the island. Bimini is small, but always full of impromptu moments of awesomeness with great people. I love this island!

A final hour long session on his last day left the total at 12 hours of work creating an incredible portrait of, in my opinion, the most magnificent animal on Earth. 12 hours is pretty is a long time, but he did it with FRACTURED RIBS! Yeah, he is a rock star. Diving, playing with sharks and tattooing while he was busted up; now that is dedication. I have to say I was nervous about the size of the artwork, but looking at it now and the way it flows with my back, I couldn’t imagine it any different. 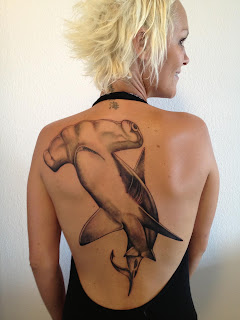 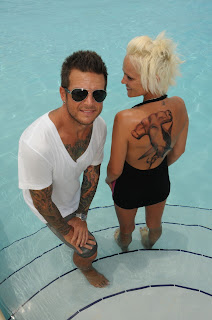 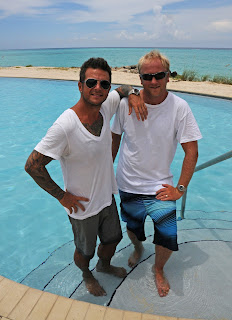 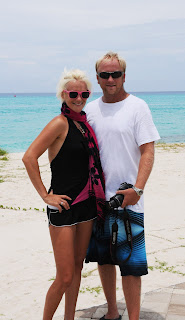 Thank you Deano for an absolutely epic BIMINI SHARKWEEK. Cannot wait for our next adventure.